Often regarded as one of the largest owls in the world, the Eurasian Eagle-Owl is widely distributed, and varies in appearance with range and habitat. This BirdEden post shares some knowledge on this interesting species. 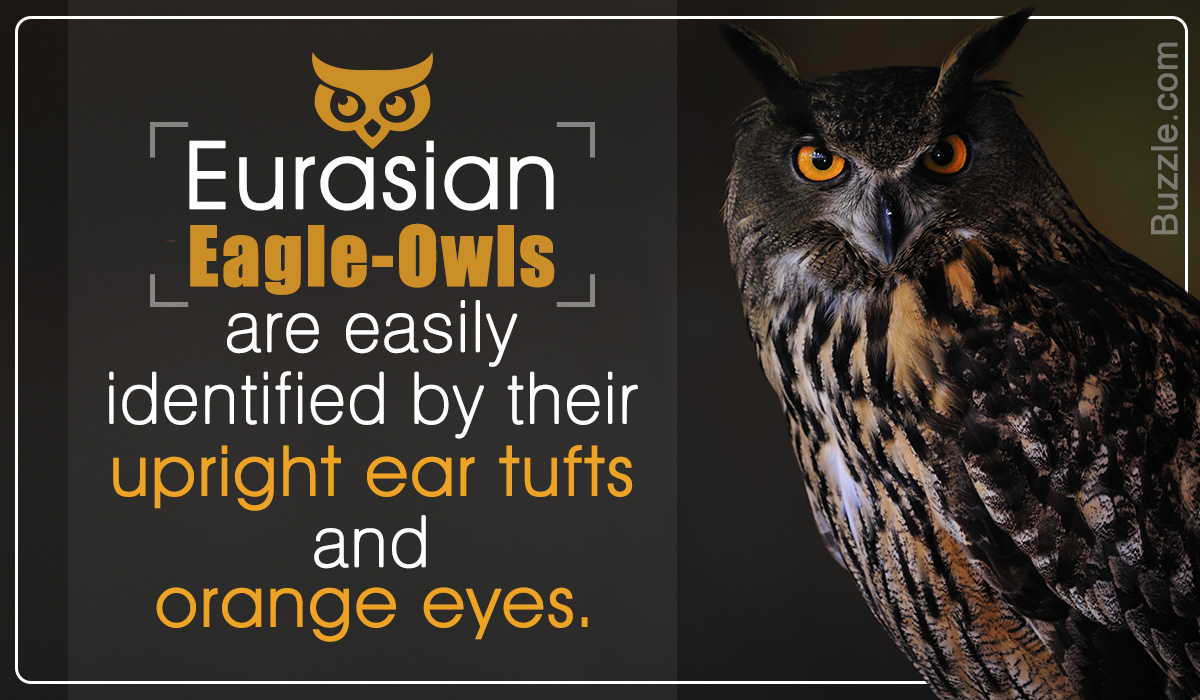 Often regarded as one of the largest owls in the world, the Eurasian Eagle-Owl is widely distributed, and varies in appearance with range and habitat. This BirdEden post shares some knowledge on this interesting species.

The typical and trenchant call of the Eurasian Eagle-Owl is a deep ooh-hu. The males usually stress on the first syllable, whereas the call of the female is a more high-pitched, bark-like scream.

It has distinct and unique vocalizations, and each and every member of the owl population can be distinguished solely on their calls. These apex predators can live up to 20 years in the wild and 60 years in captivity. The only other member of its genus found in Europe is the Snowy Owl (B. scandiacus), and is hence often also called European Eagle-Owl.

This BirdEden article deals with several interesting facts about the Eurasian Eagle-Owl, that describe its range, habitat, physical features, diet, and reproductive cycle.

✤ The Eurasian Eagle-Owl is widely distributed around the world. Its range spans most of Europe, and as far as China and Japan in Asia. It is generally not found in Britain and Ireland, but has recently been observed to successfully breed, although in small numbers, in these countries.

✤ The habitat of eagle-owls are equally diversified, varying from ravines and cliffs to coniferous forests and deserts. The Eurasian Eagle-Owl particularly inhabits cliffs that are surrounded by a small number of trees.

✤ They are also found in wooded steppes, taigas, grasslands, semi-deserts, and rocky coastlines. These owls prefer suitable rocky terrain, and can survive at elevations up to 2,000 m in Europe, and 4,500 in Asia.

✤ With a barrel-shaped build, upright ear tufts, and vivid orange eyes, Eurasian Eagle-Owls are large in size having a length ranging from 22 to 30 inches. The males weigh 3.3 – 6.6 lb, whereas the weight of the females is between 3.9 – 9.3 lb.

✤ These owls have one of the largest wingspans of almost 63 – 74 inches. Studies show that the wingspan of the Eurasian Eagle-Owl vary across continents and with habitat, especially concerning the altitude range.

✤ Like the wingspan, a little amount of color variation is also noticed in some subspecies. The plumage of this bird is usually tawny-brown to brown-black; gray undertones are also observed.

✤ The face has an almost flat or concave placement of grayish-brown feathers. The chin and throat are white, and are used as visual indicators that are frequently related to its vocalizations.

✤ The belly shows a densely mottled and freckled nature, along with black streaks. Black stripes are also noticed on the back, sides, and nape of the neck.

✤ Its legs are large, completely covered with feathers, and brownish-white in appearance. Its wings and tail are mottled-brown with dark bands.

✤ A major part of the Eurasian Eagle-Owl’s diet consists of small mammals, such as rats, mice, hares, voles, hedgehogs, and rabbits. They are also reports of an eagle-owl feeding on other birds, including woodpeckers, herons, buzzards, ducks, geese, and other seabirds.

✤ The hunting strategy commonly used by this owl begins with keeping a close watch on its prey from a perch, and then swooping and capturing it once the prey is within reach. Sometimes, the owl can also resort to look for its prey in rock crevices, mainly for young birds from nests.

✤ Often, the prey dies instantly due to the eagle-owl’s talons. The prey is then either swallowed as a whole, or cut into pieces with the help of its beak.

✤ The breeding season of this eagle-owl usually begins during late winter. Each year, 1 – 6 eggs are laid (one egg every 3 days) which are incubated by the female for 31 – 36 days. During this time, the male hunts for food and feeds the female.

✤ Once hatched, the owls start to feed themselves only after 3 weeks. Before they gain the ability to hunt, they are fed by the breeding pair directly.

✤ The owlets leave the nest only after 5 weeks; they leave ground nests in 3 – 4 weeks, and elevated nests after 6 weeks.

Although classified as Least Concern (LC) on the IUCN Red List, the major threat of the Eurasian Eagle-Owl is human interference. Some of the main reasons for the increasing number of deaths of this species are poaching and encroachment.