The stork in the picture on your right isn't old or dying; this is how it actually looks. Due to its weird appearance, it is often referred to as the 'World's Ugliest Looking Bird', but that doesn't make it any less interesting or important. Check out some interesting facts about the Marabou stork.

The stork in the picture on your right isn’t old or dying; this is how it actually looks. Due to its weird appearance, it is often referred to as the ‘World’s Ugliest Looking Bird’, but that doesn’t make it any less interesting or important. Check out some interesting facts about the Marabou stork. 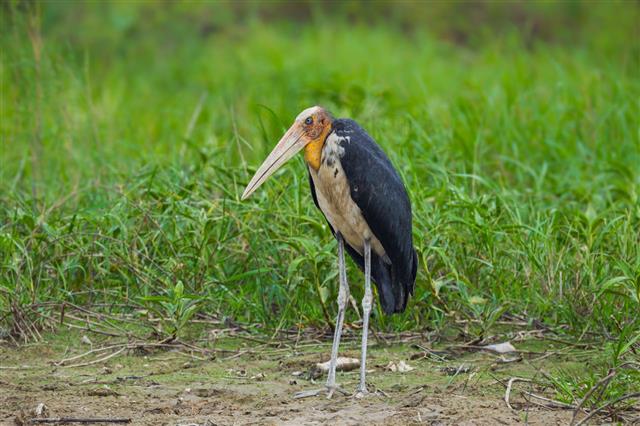 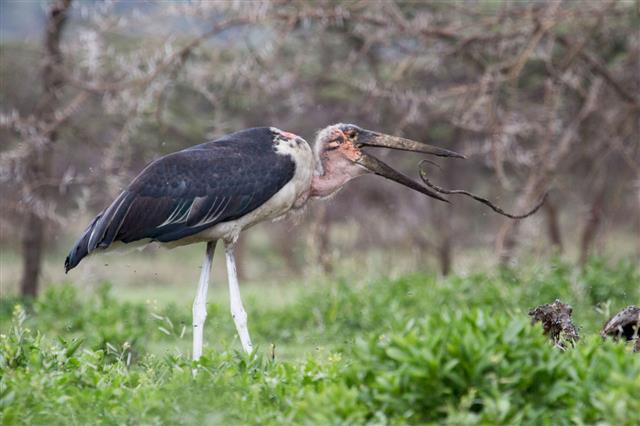 Marabou storks don’t have a voice box, but they are capable enough to produce certain sounds with the help of their throat pouch, and by clattering their bills.

When thinking of a stork, most of us imagine a beautiful, white, slender bird that delivers babies to parents. However, not all storks are beautiful, and some are so ugly that they are often associated with death.

The Marabou stork, also known as the Leptoptilos crumeniferus, is one of the tallest birds in the world. It belongs to the stork family of Ciconiidae. This wading bird is also referred as the ‘Undertaker Bird’ due to its appearance. The black feathers on the back and wings, and the white fluff around its neck, makes it look like the bird is wearing a cloak. They are native to Africa, and can be found in wet to dry areas, from savannas to marshlands and lakes. They have also been noticed in areas inhabited by humans. These storks prefer living in groups, but solitary living is noticed in some of them.

Interesting Facts About the Marabou Stork

The Marabou stork is an extremely large bird, with adults reaching a height of almost 152 cm, and weigh almost 20 lbs. Like all storks, they have long, skinny legs, and large bills. Females are smaller than the males.

Its bill can be as long as 35 cm, and the wingspan is approximately 7 to 9 feet. The feathers of the neck, chest, and belly are white.

The Marabou stork is spread throughout tropical Africa. Its habitat ranges from sub-Saharan regions to Senegal, Eritrea, and in Southern Natal in South Africa.

There are two more Asian species of Marabou storks. One of the species (Leptoptilos dubius) inhibits the areas of Myanmar, Indochina, and the Indian state of Assam, while the other (Leptoptilos javanicus) can be found on the islands of Sumatra, Java, Bali, Kalimantan, and Borneo.

An interesting physical trait about the Marabou stork is its large air pouch that hangs below the throat; it is often hidden by the neck ruff when deflated. The length of the pouch is around 45 cm, which makes it quite prominent during the breeding season.

Due to their enormous size, Marabou storks have hollow toes and leg bones, which balance their body weight, and enable them to fly.

Breeding is usually during the dry season, and they reach sexual maturity at the age of four. The males attract the females by inflating the throat pouch, dancing, and clattering the bill. These birds are monogamous in nature, and mate for life.

The birds are known to build their nests in trees, and sometimes even in tall buildings. The female usually lays between three to five eggs. Both the parents are equally involved in taking care of the young, however, only one out of four reaches adulthood.

Marabou storks are scavengers in nature, and mostly feed on animal carcasses. However, they are also known to prey on fish, frogs, eggs, baby crocodiles, snakes, small birds, adult flamingos, and locusts. They are also known to join vultures in searching for food, as vultures are equipped with hooked bills that helps in the tearing of the carcass meat.

Marabou storks practice urohydrosis, which means defecating on the legs. They do this as a cooling mechanism. It helps them regulate their body temperature, and also gives the legs a white appearance.

The IUCN classifies the Marabou stork as a ‘Least Concern’ species. Even though a Marabou stork is not a pleasant sight to look at, their feeding behavior is of great importance to the ecosystem. They eat up dead and rotting carcasses, and also feed on garbage dumps, thereby cleaning the environment and preventing the spread of pathogens.