Facts About Great Gray Owls That Will Leave You Awestruck

The Great Gray Owl is one of the most stealthy birds of prey and is known for its silent, discrete nature and ghostly characteristics. This 'Phantom of the north', the largest owl, is a rare but magnificent sight to watch. 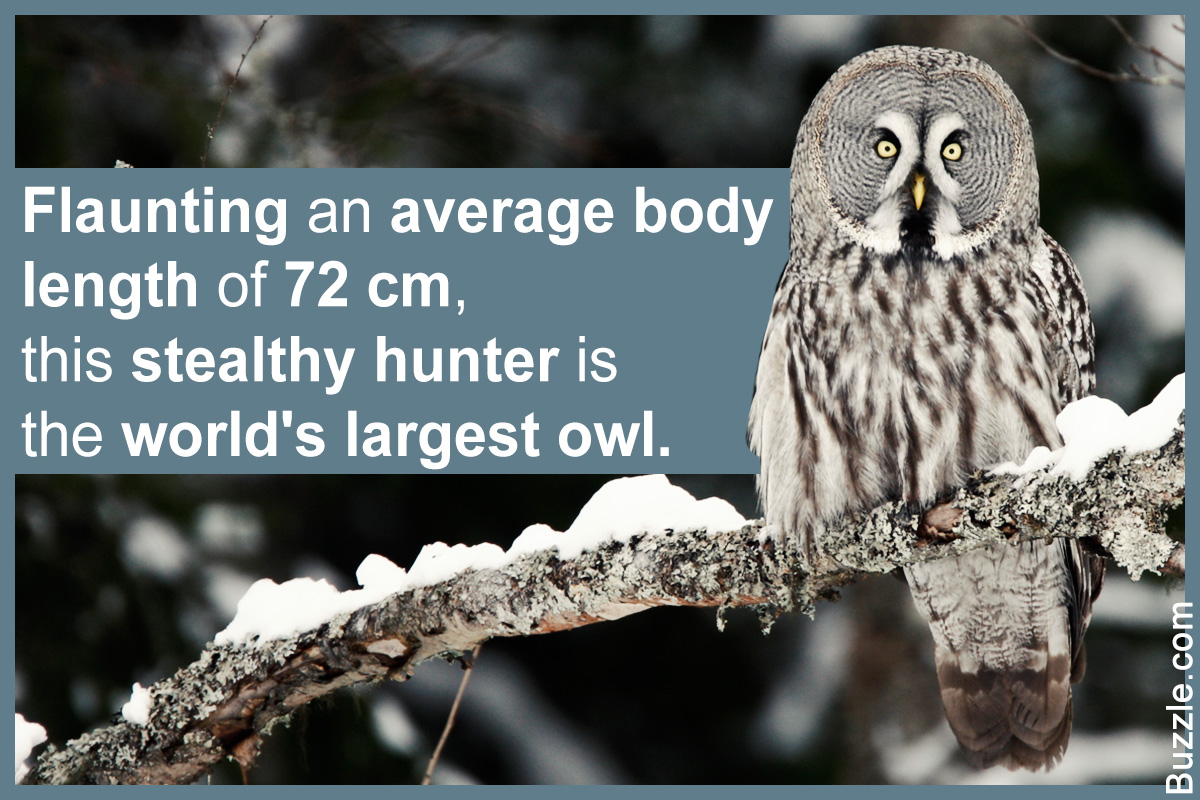 The Great Gray Owl is one of the most stealthy birds of prey and is known for its silent, discrete nature and ghostly characteristics. This ‘Phantom of the north’, the largest owl, is a rare but magnificent sight to watch.

Errol, the old owl that served the Weasley family in the Harry Potter series, was a Great Gray Owl.

Birds of prey or raptors are a set of natural predators that feast on vertebrates (including other birds), and their predatory adaptations have always amazed a lot of us. Owls represent one of the most interesting and wise members of this category of hunters.

Distributed across the Northern Hemisphere, one of the most intriguing species of owls is called the Great Gray Owl or Strix nebulosa. Belonging to the Strigidae family of owls, it is famous for its silent and graceful, yet spectral hunting ability, and it is rarely observed.

Owing to such ghastly abilities, it is infamously known as the ‘Phantom of the north’ and is also known as the Lapland Owl, Spectral Owl, Bearded Owl, and Sooty Owl. This BirdEden write-up provides an overview of the physical features, habitat, feeding habits, life cycle, as well as some interesting facts about Great Gray Owls.

» This large, impressive owl has uniquely structured physical features that enable it to precisely locate its prey. A rounded head with extra-large facial discs with concentric gray circles, round, yellow eyes with a sharp gaze, a yellow bill with a black spot below it, and a characteristic ‘bow tie’ or ‘snowy mustache’ located below the facial discs are some of the key features to identify a Great Gray Owl lurking in the snow.

» Also known as ‘ruffs’, its facial disc is the largest among all raptors, and serves to direct the sound waves to its ears. The ears are positioned in an asymmetric fashion, such that one ear is higher than the other. However, unlike other owls, their ears are not covered by tufts of feathers.

» As found in many other birds of prey, the female owls of this species are larger than males. The adult body length lies in the range of 61 to 84 cm with the average length being 72 cm for females and 67 cm in males. The wingspan of adult Great Gray Owls ranges between 137 and 152 cm, and the average wingspan has been observed to be 142 cm in females and 140 cm in males.

» The weight of Great Gray Owls, however, is not consistent with its huge size, but is lesser than many other owl species. The weight of an adult varies from 580 to 1900 g, averaging at 1.29 kg in females and 1 kg in males. The deception behind this grandeur comes from the excessive and fluffy plumage of this bird. In addition, they have a wedge-shaped tail that is relatively longer than other owl species. The plumage also enables the owl to hide its sharp talons. 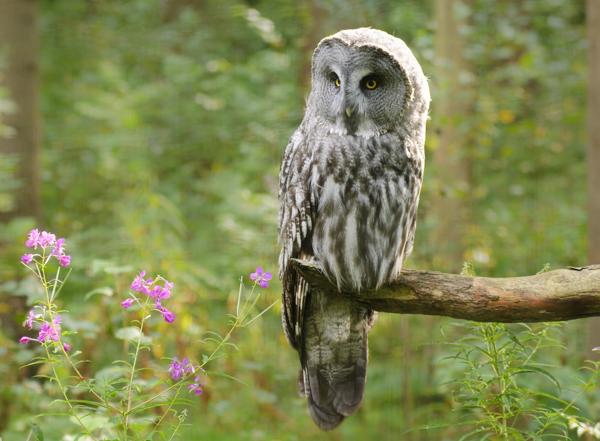 » The habitat of these Phantoms of the north comprises the dense taiga and boreal or mountainous forests of North America. They inhabit the coniferous forests of Alaska, Canada, central Sierra Nevada, as well as the northern parts of Minnesota and Wisconsin. They are also found in some parts of northern Europe and Asia. The clearings or bogs spread between these forests, are their sites for foraging and hunting.

» The Great Gray Owls do not follow any seasonal migrations but are known to travel over large distances in search of food. Moreover, they may not return to the place where they experienced food scarcity, unless the food availability increases. Due to such relocation in search of food, they are sometimes described as a nomadic species. The largest irruptive migration of the Great Gray Owls was observed in 2004 to 2005, wherein over 2000 of them migrated from Ontario and Manitoba to northern Minnesota. 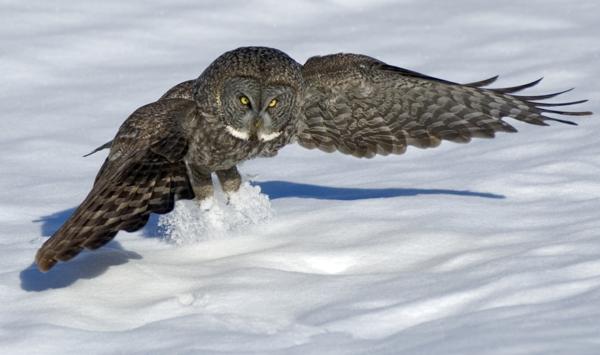 » The diet of Great Gray Owls contains small vertebrates including rodents, shrews, and small birds. About 80 – 90% of the diet comprises small rodents―mainly voles and mice. They are also known to feast on rabbits, hares, squirrels, weasels, small hawks, frogs, and snakes. Although nocturnal in nature, it may actively hunt during the daytime as well.

» While perching on trees, the Great Gray Owls silently gaze upon the meadows and listen for the movements of their prey. Once located, they quickly swoop down and grasp it. They are known for their ability to ‘snow plunge’ on their prey, which is observed only in a few large owl species. They owe their keen sense of hearing to the large facial discs which direct the sound waves to their ears. As a result, they can precisely determine the position of their prey. This enables them to dive into the thick snow, and clutch their delicacy, even if hiding or moving at a distance of 2 feet below the snow. The result of such a hunting style is the formation of characteristic ‘plunge marks’ in the snow, which is indicative of its presence. 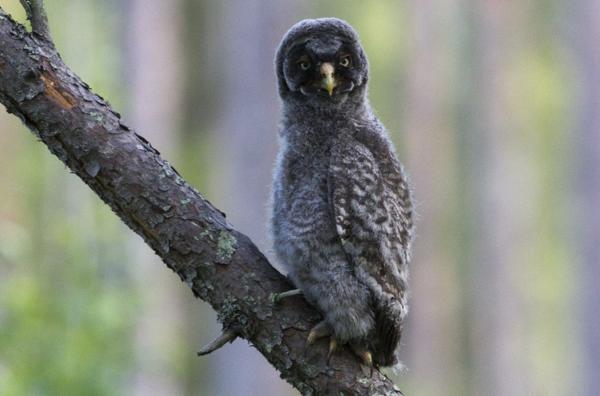 » Late winter is the breeding time for the Great Gray Owls. Abandoned nests of hawks and crows, as also broken treetops, are common breeding places. The female Great Gray Owl lays 2 – 5 white, oval eggs during the months of March to May. However, in the years of deep snow, this may be delayed up to the month of June. The generally observed clutch size is four, but the number of eggs laid may be less in periods of food scarcity.

» The Great Gray Owl was first described by Johann Reinhold Forster in 1772, from a specimen collected by Andrew Graham, in Ontario, Canada.

» Strix is the ancient Roman and Greek word for owl, whereas the specific name nebulosa has been derived from the Latin word nebulosus, which means foggy or misty.

» The fate and population dynamics of the Great Gray Owls are largely dependent on the population of voles.

» It has earned the title of ‘bearded owl’, due to the characteristic white mustache present below the bill.

» In Alaska, it is sometimes consumed for its stored winter fat.