Often called budgies, parakeets are so playful that they are fun to watch. If you want to keep them in pairs, this BirdEden write-up is for you. It will help you know how to identify a parakeet's gender.

Often called budgies, parakeets are so playful that they are fun to watch. If you want to keep them in pairs, this BirdEden write-up is for you. It will help you know how to identify a parakeet’s gender.

DNA testing is the only way to judge a parakeet’s gender with absolute certainty (99.9% accuracy). It is inexpensive and fast too.

Although the generic term ‘parakeet’ is commonly used for a parrot that has a slender body and a long tail, the term represents several species of parrots belonging to different genera. These birds are commonly referred to as budgies or budgerigars. These small to medium-sized, vibrantly colored birds are popular as pet birds. They are an invariable part of a pet shop as they are very attractive and intelligent, and they have outgoing personalities. With regular training, proper socialization, healthy food and treats, they can learn to speak and whistle. 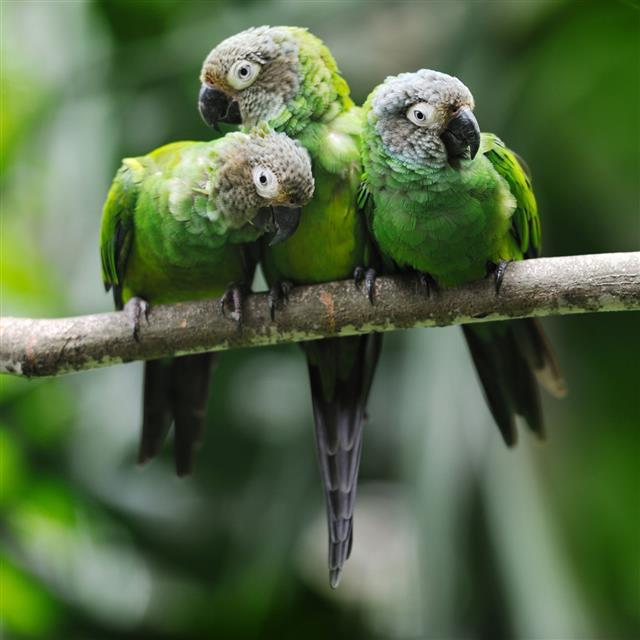 You can breed parakeets by keeping them in pairs or in groups. They breed readily in groups. You can expect them to be happy and healthy, when kept in the company of other similar birds. The presence of other parakeets encourages a pair to breed. They are very social with each other. However, if you want to avoid conflicts between breeding pairs, or if you have limited space, you may keep them in pairs.

1. Color and Texture of the Cere (Nostril Area)

➺ Cere is the bulbous, fleshy area where the upper part of beak meets the head. Usually, mature males have a dark blue (can be purplish) and smooth cere. It is also more prominent than that of a female. The male cere is quite consistent in color too. Young males usually have a light pink/purple cere. Generally, adult males with light-colored feathers (white, all yellow, the albino, lutino, and certain recessive-pied mutations) have a pink or tan cere. In that case, it is difficult to tell the difference between a male and a female parakeet. Generally, as the birds mature, a male cere turns darker while a female cere turns lighter.

➺ An adult female has a pinkish-brown, crusty cere. Usually, it is not consistent in color. A young female initially may have a pink cere, which might turn slightly purplish/bluish-white after 3-4 months, and may again turn pinkish-brown or pinkish-blue after about 8 months.

2. Color of the Feet and Legs

➺ Males may have bluish legs and feet. Hormones are responsible for the color of the cere and the feet.

➺ Females may have pink or brown colored legs and feet. Young babies usually have pink feet, irrespective of the gender. However, some adult males have pink legs. 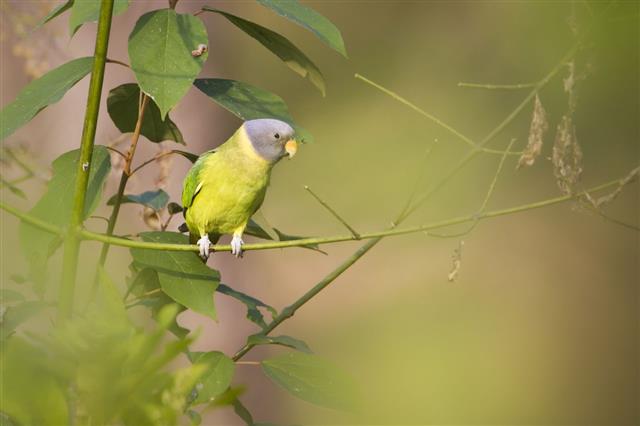 ➺ Males are usually larger, stronger, and slightly heavier than females. They have a comparatively larger head. The colors of the feathers of a male are more vibrant than those of a female. All these factors depend upon the health of the birds.

➺ A male has a rounded head while a female has a slightly flattened head. 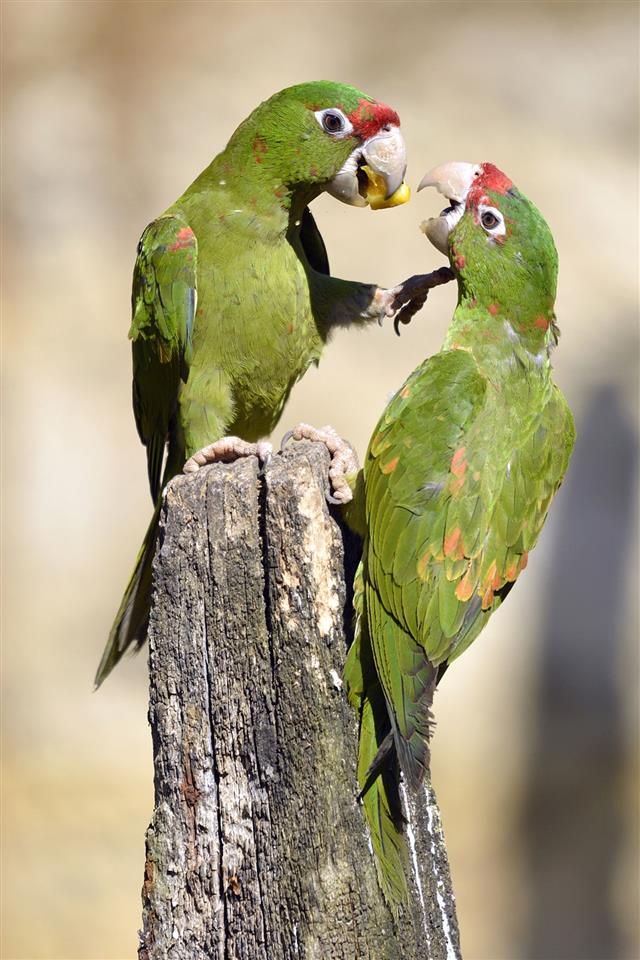 ➺ Although you cannot rely on the behavioral pattern to determine the gender of your parakeet, after keen observation, you may come to know the difference between the males and females, and you may be able to guess the gender more accurately. Males are the singers. They are relatively calm. If you notice a bird feeding another bird, it is more likely to be a male. Males will feed other males, but a female will feed only her babies.

➺ Females are notoriously aggressive and they chatter more. They sing less. Females are more likely to bite you hard than the males. 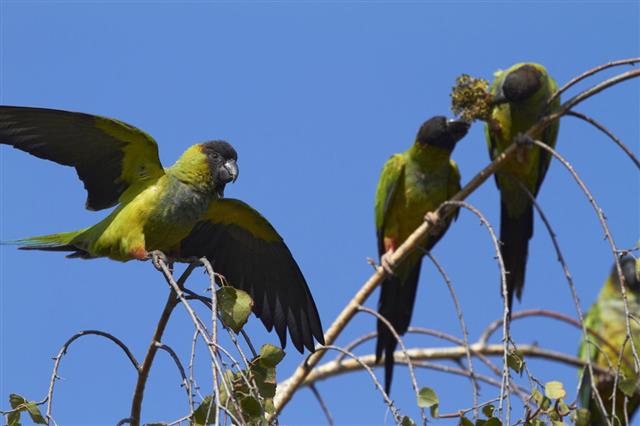 ➺ It is obvious that if your parakeet lays eggs, it’s a female.

➺ However, the absence of eggs does not mean that your parakeets are males (or both are females). Females may not be able to lay eggs due to malnutrition, other health problems, old age, etc.

6. Spots on the Cheeks

➺ Males may have dark purple spots on cheeks.

➺ Females may have light purple spots on the cheeks. However, this cannot be an accurate way of telling whether the parakeet is a male or a female, as many times, there may not be any color difference at all.

➺ DNA testing is the only accurate way of determining the gender of your parakeet.

➺ A fresh sample of the bird’s blood is required for the test. To make the test minimally invasive, it is performed on freshly plucked feathers. Fallen or molted feathers are of no use.

➺ You should strictly follow the instructions of the genetic lab while pulling and submitting the feathers.

➺ Blood sexing (only 1-2 drops of blood are needed) is less safe, more stressful to perform, and less accurate than feather sexing.

➺ Freshly cracked egg shells that contain DNA from the newly-hatched chick can be examined to determine the sex of parakeet chicks that are just a few hours old.

As explained above, age and health play an important role in size and color of the cere and feathers of parakeets. Certain diseases, for example, an iodine deficiency or development of oestrogen-secreting testicular tumors, can affect the color of the cere. So, it is better to consult an avian vet to determine the sex of your parakeet. 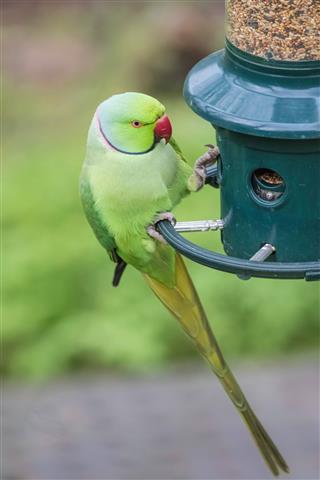 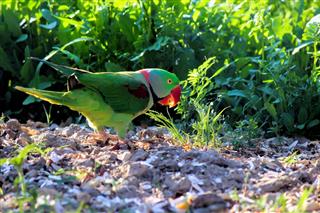 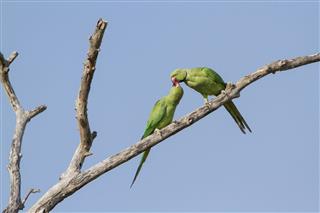 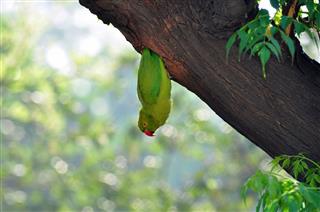 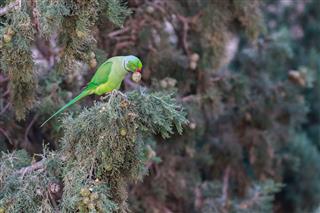 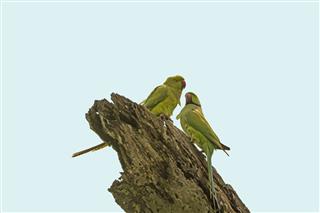