Interesting Facts About Purple Martins That Will Make You Go Wow

The songbird of North America, the Purple Martin is the most sought-after backyard bird. It is the largest swallow, and can demonstrate some extraordinary aerial acrobatics to catch a flying insect. Read more about the Purple Martin, in this BirdEden post.

The songbird of North America, the Purple Martin is the most sought-after backyard bird. It is the largest swallow, and can demonstrate some extraordinary aerial acrobatics to catch a flying insect. Read more about the Purple Martin, in this BirdEden post. 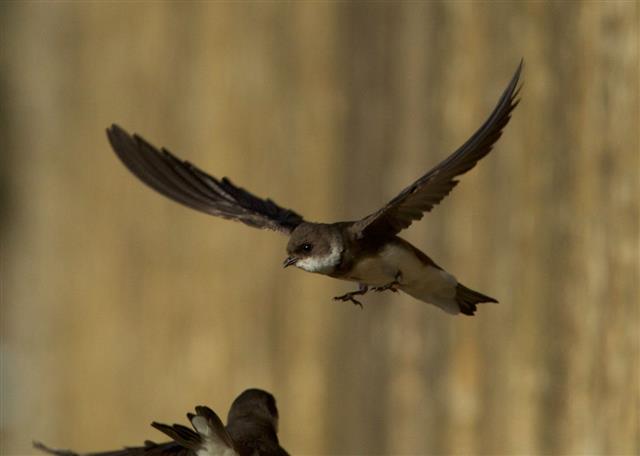 The oldest known Purple Martin was 13 years and 9 months old.

The Purple Martins (Progne subis) on the eastern side of the US are so accustomed and dependent on humans, that if humans were to stop supplying the nesting sites to them, they would almost disappear. Those on the western side still follow the ancestral way of dwelling in abandoned woodpecker holes or other natural cavities. The location and type of dwelling really plays a major role in the Purple Martin’s life, because when the female starts her search for a mate, she usually selects the mate who has the best nest. So, the mate has to be the best civil engineer, if it wants to start its love life.

Rightly called ‘dark swallows’, Purple Martins have a dark, shiny plumage, that can be blackish-purple to purplish-blue. These birds can even appear blackish-green sometimes. Young Martins are lighter, more grayer, and exhibit ‘delayed plumage maturation’. It takes almost a year for them to acquire their steel-blue sheen. While males are dark entirely, females have patches of dark-colored feathers and lighter undersides. Immature males look more like females.

They range from around 20 cm in length, and have a wingspan of almost 40 cm. Their weight can be anywhere from 45 to 60 gm. Female Martins closely resemble the Tree Swallow, and the only point of difference is the grayness of its throat and breast, which is white in the Tree Swallow. A similar issue is faced by the male Martin also. It shows extreme similarity to Starlings, who also have equally lustrous feathers and vivid colors. The only point of differentiation is the forked tail and longer wings of the Martin.

Purple Martins breed in the temperate areas of North America. Some parts of the west coast from British Columbia to Mexico are also spanned by them. As winter approaches, they start moving southward towards the Amazon basin and Ecuador, but never go beyond the Andean foothills. It is observed that the males usually arrive at a particular site before the females.

It is seen that Martins efficiently use natural as well as artificial cavities as their home. In the eastern parts, they are highly dependent on humans for living areas; therefore, they are also found in cities and towns. This is also a reason that their population is patchy. In the western parts, these birds use natural cavities like woodpecker holes in trees or crevices in the cliffs as nesting sites.

Purple Martins are insectivores. All year round, they prey only on insects. They exhibit fantastic aerial acrobatics while trying to catch their prey midair. Whenever they spot their food, they suddenly turn direction, speed up, and flare their tails to trap the insect. They prefer grassy areas and forest openings near water bodies as a ‘swoop zone’ for catching insects. They also drink water during flight, by opening their beaks and scooping up water from the surface of water bodies.

An interesting fact about the Martin is that, it ingests sand, small pebbles, broken glass, metal fragments, egg shells, and other coarse material, that helps it pulverize the hard exoskeletons of the insects they ingest. The adults also feed their nestling these objects, which provide the grit for digesting hard-bodied insects.

Males are the first ones to arrive at a breeding site to establish territory. The female usually selects a mate depending upon the condition of the nest. The quality of the compartment determines the male Martin’s ‘quality’ as a resource provider. The nest built by the Martins are an example of good engineering. They are made of three layers. The first layer is the foundation made up of twigs, small pebbles, sand, and mud.

The second layer is made up of finer twigs. The third layer consists of some leaves, that act as a compression or padding layer where the eggs are laid.

Normally, three to six eggs are laid at a time. Most of the time, it’s the female who incubates the eggs. Sometimes, she gets help from the male for incubating.

It is seen that Purple Martins are single-brooded species, and raise only one family in one breeding season. The nestling period is around 26 to 34 days. Fledging, i.e., development of strength in muscles and wings, enough for independent flight, occurs approximately one month after birth, after which, the young ones leave their nest as independent birds.

These Martins become food for many predators like raccoons, owls, hawks, falcons, snakes, crows, merlins, kites, and opposums. Out of all these, the owl is their major predator. They simply ravage Martin colonies, and kill many young and adult Martins. It can be said that those Martin colonies that get cursed by the owl’s hex get abandoned and are left empty, as the remaining birds will simply fly away, never to return. Another threat for them are the European Starlings and the House Sparrows, because they usually damage the Martin’s eggs and overrun their nesting spots.

In summation, it can be said that, although Purple Martins fall in the ‘least concern’ category in the conservation status ranking system, they are slowly moving to the ‘near threatened’ category, due to increased pesticide use and prolonged weather extremes. Therefore, only humans can help counteract the declining numbers, by providing more nesting sites with better provisions for survival.