Habitat and Other Features of Kiwis: New Zealand’s Native Bird 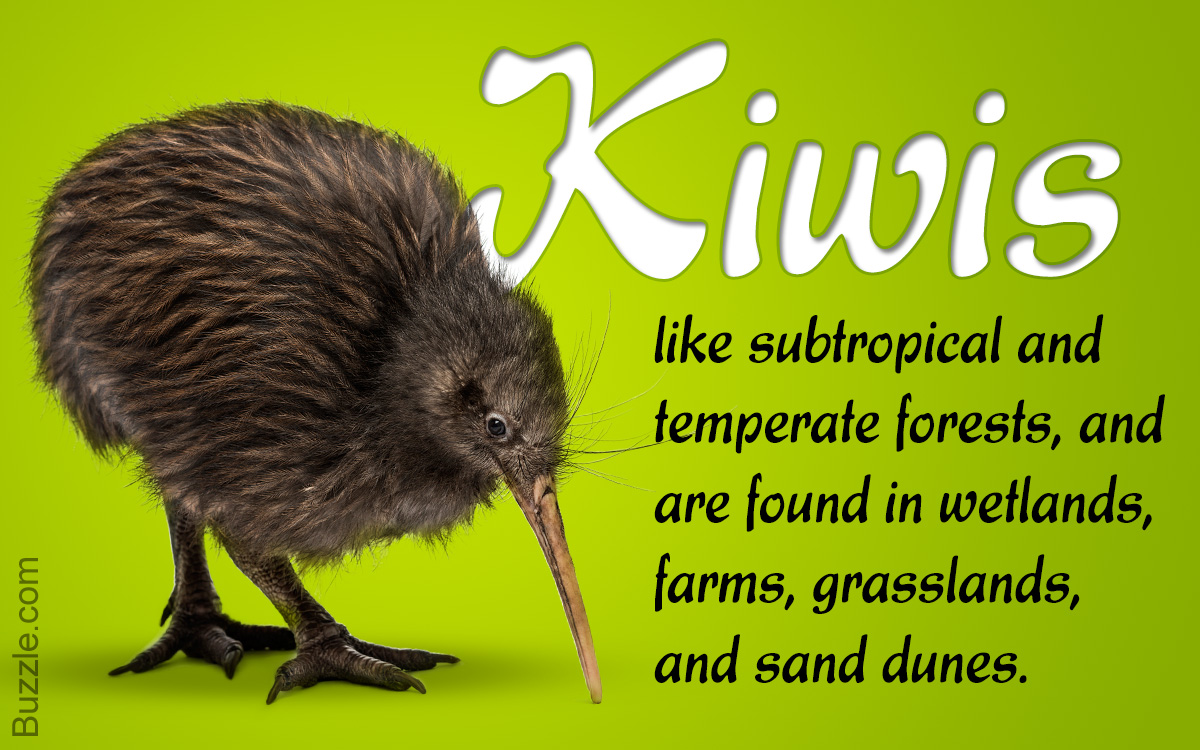 In accordance with the threat ranking in the New Zealand Threat Classification System, the brown kiwi, great spotted kiwi, and tokoeka (found in the Fiordland and Stewart Islands) are “nationally vulnerable”, while the little spotted kiwi is “at risk (recovering)”.

Kiwi birds are a species of flightless birds that are native to New Zealand. They are not found anywhere else in the world. They have also been adopted by the country as its national symbol.

Kiwis do not need immaculate and untouched forest habitats to survive. They like subtropical and temperate forests. They love to hide in bushes and farmlands. They especially like places with trees growing along a river’s edge, i.e., wetlands. They can also be found in rough farmlands, tussock grasslands, plantations, mountains, and sand dunes. This is because of their rapidly depleting habitat, which has forced them to find living places elsewhere.

These birds are soil feeders, which means that they eat directly from the soil. Thus, they prefer places that do not have leaf cover on the ground that they have to sift through to get to the dirt. They also dislike ground that has been trampled on by cattle, as the soil is hard at such places. The best habitat for this kind of bird would be the scrub-covered grasslands, the river lands, and the bushes by the roadside. As they are shy in nature, even the pine forests could be of help in providing them proper shields to hide from light and predator danger.

Given below are the habitats of the different species of Kiwi birds, which also lists the regions where they are found. These species have different distributions and are found in different regions.

This bird is found in North Island. It lives near Northland, Coromandel, Little Barrier Island, Eastern North Island, Kapiti Island, Aroha Island, and many more places. It is said to have been introduced in many forests near Palmerston North. Its numbers are dwindling with a decline in habitat due to predators such as dogs, cats, and stoats, and also due to different avian diseases.

This species is divided into Haast and Southern Tokoeka. It is found in Westland and Fiordland on South Island, and is also found on Stewart Island. Predators such as ferrets, possums, and dogs are a main threat to the adult birds, whereas stoats and cats are known to target and hunt chicks. Due to the minimal presence of these predators on Stewart Island, the population of these birds has been more or less stable.

This bird was mainly found on Kapiti Island. However, it has been introduced in places such as Red Mercury Island, Long Island, Hen Island, and a few other places. In the year 2000, a few of these birds were set free into the Karori Wildlife Sanctuary. As these birds are very small in size, predators such as cats, dogs, and stoats pose the main threat. However, with a lot of conservation efforts going on, there is hope that their numbers will improve.

Initially found all throughout South Island, its numbers dwindled due to predators and invasive species. Thus, it is now restricted to only three regions. These are the northwestern region from Nelson to the Buller river, from the Hurunui River to Arthur’s Pass on the northwest coast, and the Paparoa Range on the west coast. Its main predators are cats, dogs, pigs, mustelids, and possums. Today, its numbers are less than 15,000.

It is also known as the Rowi. This bird is found in the Okarito forest, which is on the West Coast of South Island. This species is endangered although certain conservation efforts have helped to an extent. The South Okarito forest has been made into a Kiwi sanctuary. The main threat for this bird is from stoats.

These birds are shy and nocturnal. However, it is believed that they come out at night to avoid predators and human interaction. In some sanctuaries in New Zealand, where there are no threat from predators, these birds have been spotted during the daytime.

✦ Long Beak: These birds have a very long beak and powerful nostrils at the end of it.

✦ Appearance: These birds are as big as domestic chickens. The beak length is a third of their body length. Their feet have three toes.

✦ Appearance: These birds are as big as domestic chickens. The beak length is a third of their body length. Their feet have three toes.

✦ Camouflage: They have shaggy, coarse, and brown feathers consisting of patterns that make it possible for them to camouflage with the ground.

✦ Smell: The unpleasant smell of these birds is similar to that of ammonia or mushrooms.

✦ Small Wings: They have extremely small wings, which render them flightless.

✦ Kicking: They use their very strong legs to kick and scratch any threat. They are fast runners too.

✦ Large Eggs: These are the only birds that lay the largest and heaviest eggs in the world in proportion to their weight.

These birds are known to form bonds for life and have monogamous relationships. There have been records of relationships lasting for as long as 20 years. Every two to three days, the pair burrows together and also calls to each other at night. The male’s call is harsher than the female’s. This takes place during the mating season which lasts from June to March. These relationships are known to be quite volatile and physical, with the female dominating over the male.

Kiwi birds are omnivores; hence, their diet includes both plants and animals. However, they prefer eating worms, cicadas, beetle larvae, caterpillars, snails, slugs, fly larvae, spiders, and such small animals. They also like to eat invertebrates such as crayfish and frogs. They have been known to catch and eat eel and tuna fish as well.

Due to their highly developed sense of smell, they can sniff out worms from as deep as 2 to 3 cm inside the soil. As the insects and worms that they eat contain about 85% water, these birds do not need to drink much water. When they do, they immerse their beaks in it, tip their heads back, and gurgle it down.

These birds are extremely territorial, especially males. They are known to attract a mate with their territory. This territory can be as big as 40 hectares (100 acres). It will always be dotted with burrows or shelters. However, after mating, the couple can expand their territory to 100 acres. They are acutely aware of their neighbors, and they often engage in calling duels. If a kiwi is trespassing into another’s territory, it will rush back immediately, in full speed, to its own before returning a neighbor’s call. Kiwis are known to engage in fights and can kill each other over this. These fights usually take place between two territories. They are rough and involve kicks, jumps, and tears using the birds’ powerful legs. You will hardly find a kiwi bird habitat in a gathering. On Stewart Island, however, kiwis do live in small, clustered groups.

These birds do not live in nests like the other birds; they are burrowers. They sleep in a burrow at night and usually find another one for the next night. They live in patches of land. Different species have different habits of burrowing. The great spotted kiwis live in dens. They put a lot of time and effort into the construction of labyrinths, which are several meters long and have more than one exit. The little spotted kiwis and the brown kiwis are habitual burrowers and build simple, single entrance burrows.

These very unique birds have now become endangered due to human interference, which has caused them to lose a major portion of their habitat, and the various predators that pose a threat to their survival. Many efforts are going on the world over to conserve and protect them to ensure that they do not disappear forever.