Recent studies have revealed some new information that contradict the age-old dodo myths. These myths made us believe that the dodo was overweight and slothful, and these characteristics led to the demise of the whole dodo population. However, now scientists consider this extinct bird as the perfect example of environmental adaptation!

Recent studies have revealed some new information that contradict the age-old dodo myths. These myths made us believe that the dodo was overweight and slothful, and these characteristics led to the demise of the whole dodo population. However, now scientists consider this extinct bird as the perfect example of environmental adaptation!

The plight of this flightless bird is well-known; it became extinct. Nevertheless, there was a time when the dodo was considered to be a figment of somebody’s imagination. Numerous expeditions and searches were conducted to dig out the skeleton of this nearly mythical bird. However, all these efforts were in vain until dodo enthusiasts, Harry Higginson and George Clark, stumbled on the remains of the bird in 1865. This finding established the existence of this short-winged, fruit-eating bird, and thereby led to a more prominent search for complete set of dodo bones.

» The original Latin name given by Carl Linnaeus to this bird was ‘Didius ineptus’ meaning ‘the inept dodo’. However, scientists now prefer to call it as ‘Raphus cucullatus’.

» The main predators of these birds were the Dutch sailors (and the animals they brought along) who, en route to Spice Islands of Indonesia, used to halt at the habitat islands of dodos. The dodos were hunted down by the sailors and first settlers on the islands. Although their flesh was described as tough as old boots, it did not stop the explorers from preying on these flightless birds for food. The Dutch were quick to rename the birds as ‘valghvogel’ which translates into ‘disgusting bird’.

» The famous dodo of Alice’s Adventures in Wonderland was inspired by the remains of a dodo, kept in the Oxford University Museum of Natural History. Unlike the popular myth associated with this bird, the author, Lewis Carroll, depicted it as a wise creature instead of a slothful bird. In fact, some believe that dodo character in the book was the portrayal of the author himself. Perhaps, it stemmed from the fact that at times Dodgson, who stammered, represented himself as ‘Do-do-dodgson’.

» After DNA testing of the last remaining soft tissue of a dodo, it has been proven that the dodo was a close relative of the Nicobar pigeon. Interestingly enough, when Johannes Theodor Reinhardt, a zoologist, put forth his theory that the dodo was a type of ground pigeon, he was much criticized by his peers.

» Some alive and kicking dodos were shipped to Europe in order to display them to the public. They were overfed and fattened up during the journey. These specimen were used as models to draw the portrayal of dodo birds in those pre-camera era. The pictures drawn by European artists cemented dodo’s image as a goofy, gluttonous bird.

» The near-extinction of the tambalacoque or the dodo tree (Sideroxylon grandiflorum) has been wrongfully attributed to the extinction of this bird. It was believed that the seeds of the tree required to pass through the digestive tract of the dodo to be able to germinate. Even though these trees are rare, their mere presence in the nature rebuts the theory of their dependence on dodos for survival.

» The dodo existed when the cameras didn’t. So, for many years, human beings had to rely upon the paintings and written descriptions of this bird, provided by the early naturalists, explorers and the 17th century European painters.

» The paintings by European artists which became more popular than the early drawings, depicted the Dodo bird as being 3 feet tall and quite robust. However, credibility of these paintings is now largely doubted, due to the trend of exaggerating the truth, prevalent in European arts during 17th century.

» Until 2007, only fragments of dodo skeleton were available. However, with the discovery of a complete skeleton by some adventurers in a cave in Mauritius in 2007, it has now being estimated that the bird did stand about 3 feet tall and weighed somewhere around 44 pounds. The bird is believed to have a 9-inch long bill with pointed hook, grayish plumage, yellow legs, small wings and a tuft of small feathers towards its hind quarters.

» Mauritius, an island in the Indian Ocean, was the habitat of the Dodo birds. This island was isolated from the rest of the world till humans reached it in the early 16th century.

» The geographical and environmental conditions of the island of Mauritius provided for extreme evolution of the bird, that manifested in the form of gigantism and flightlessness. It’s these two attributes of the now-extinct bird that brought it tremendous popularity in the world of evolutionary biology, because extreme evolution is the best illustration of how the forces of nature work.

» The Dodo thrived on the island of Mauritius in the absence of predators. They did not need to fly away to escape other animals and they also made their nest on ground. Their diet consisted of seeds and fruits that were abundant on the forest floor. In the absence of predators and due to abundance of food, these birds grew big in size and their wings became small, losing the ability to fly.

» The dodo birds were perfectly evolved for their environment. What led to their extinction was human activity. As they had never been threatened on their native land, they were incautious when they first saw humans. They did not run away from human or the cats, dogs and pigs which the earliest settlers introduced to the island. This made them an easy prey.

» The Dodo’s vulnerability was exposed due to the fact that they built their nests on the ground. In fact, a number of different types of birds have been wiped out from the face of the Earth because they built nest on the ground.

Even though the bird was perceived as overweight and slow by the general populace, and it was believed that these traits were responsible for its evolutionary inferiority and subsequent extinction, the new findings have busted a large number of myths about dodo.

A noteworthy contribution has been made by Andrew Kitchener of the Royal Museums of Scotland. He pointed out, that it is only the pictures drawn by European artists that show the dodo as overweight birds. Though these birds were large, the paintings by the later European artists grossly exaggerated their build. He focused attention on earlier drawings (that are logically more authentic), where the birds are shown to be much thinner than they are depicted in the later drawings.

Kitchener also studied skeletal remains of the bird with the help of the techniques that archaeologists and criminologists use and produced skeletal patterns that corroborate the thin structure of the birds as shown in the earlier drawings. Using more advanced means of study on the bones, it has been concluded that these birds were swift on foot. This finding gains support from some eyewitness accounts, corroborating that these birds were indeed quite agile.

For years, the history has been sullied by inaccurate accounts of the bird. However, more recent facts show that this bird is the perfect example of evolutionary success and definitely deserves better press than it has got for so long. 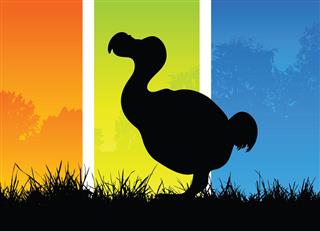 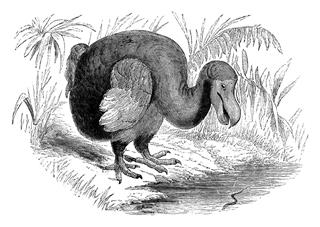 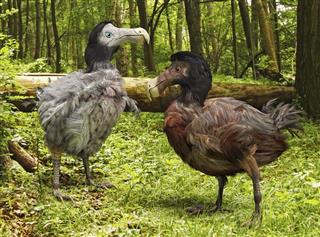