Pigeons are normally said to be too common and a nuisance. But, meet the Nicobar pigeon - a gorgeous bird, thanks to the colorful plumage. BirdEden tells you about its habitat, diet, and other interesting information.

Pigeons are normally said to be too common and a nuisance. But, meet the Nicobar pigeon – a gorgeous bird, thanks to the colorful plumage. BirdEden tells you about its habitat, diet, and other interesting information.

One of the adaptations of these birds is that they have a very strong gizzard (the part of the stomach used for grinding food). This helps them feed on hard nuts which humans can eat only after hammering them.

The Nicobar pigeon (Caloenas nicobarica) is one of the largest pigeons and is the only member of its genus. It is also known as vulturine pigeon, hackled pigeon, or white-tailed pigeon. It has a beautiful plumage, unlike its close relative the dodo (gray). These birds are found only in some parts of the world, like the Andaman and Nicobar islands in Southeast Asia. They try their best to maintain distance from humans and other predatory mammals. Their behavior is quite different from the other pigeons and doves.

Very little is known and studied about these beautiful birds. Their sightings are possible but they breed on very remote (no human habitat) islands. Let’s try to gain more information about them.

✦ It has a sturdy body with a small head, long legs and wings, and a small white tail. The adults grow up to 16 inches and will weigh about 1 pound. The females can be on the heavier side.

✦ The feathers on the head and the neck are blue gray. The mane is covered with iridescent, purple-colored long hackles.

✦ They have iridescent feathers in shades of green to blue with golden and coppery overtones.

✦ The male and the female both have the same plumage but they can be distinguished easily. The male is larger than the female and has a brown iris, while the female has a white iris. Also, the females have a smaller knob on their bills.

✦ It is found mainly in South East Asia and the Pacific. Its range starts from the Nicobar Islands in the Andaman Sea to Thailand, Malaysia, Indonesia, the Philippines, and then Papua New Guinea. They are also found on parts of the Solomon Islands and Palau, Myanmar, and the islands near Cambodia and Vietnam.

✦ They prefer a habitat of small and wooded forests, where they get original forests to feed on. They are also seen near lowland forests and mangroves as they need a constant supply of food. Even though they are spread over a fairly wide range, they are very rarely spotted as they prefer to inhabit the less disturbed islands. These birds are quite nomadic because they will keep moving to different islands.

✦ These birds feed on different fruits, seeds, and some small insects. Their strong gizzard helps them feed on nuts which have very hard shells.

✦ In the wild, these birds breed in places where there is no human intervention. Also, these birds are monogamous, and hence, mate for life. The season starts with courtship where males are seen bowing and showing off their bright plumage. The courtship period can continue for a few days.

✦ These birds can breed year-round. The male selects the nesting site and gathers all the required materials. The female then arranges them. These birds do not make complicated nests as they untidily use only some twigs and dried leaves, just to prevent the egg from rolling down. The nests are built in trees, but not very far from the ground. They may build it higher if in a disturbed area. Sometimes, one nest invites the other flock members to build nests at the same tree.

✦ The female lays only one egg per clutch. The egg is elliptical in shape and white with a bluish tinge. Both parents take turns in incubating the egg for a period of 3 – 4 weeks. When the chick is born, it is naked and altricial, which means completely dependent on its parents. The adults regurgitate their food and feed the chick a crop milk. The fledglings get independent only after a month, but choose to stay in the nest for some more time. The juveniles have a dark-colored tail till 2 years and then they get the adult white tail.

✦ These birds are seen traveling in big flocks, almost up to 85 birds. They spend their day searching for seeds, berries, and insects in the forests. During the day, they do not mind human presence, but at night, they prefer and migrate to deserted islands.

✦ The white tail of the birds can be most prominently seen when they are flying. The tail guides other birds while flying at night or in the dark. Everyone follows each other’s tail and manages to fly in a flock.

✦ These birds have the ability to suck up water (like we do from a straw). This feature is shared by all pigeons, but other birds have to look up to take in the water.

✦ These birds have the ability to suck up water (like we do from a straw). This feature is shared by all pigeons, but other birds have to look up to take in the water.

✦ Some birds are known to keep their neck plumage erect, especially males in courtship, or sometimes, in aggression.

✦ These are not very vocal birds but they normally coo. They make a sound that resembles a pig grunting, to scare and threaten predators.

Unfortunately, this colorful species has been marked as “Near Threatened” by the IUCN. The exact population is unknown but the numbers have been reducing. Clearance of islands and the forest areas have caused their decline. Also, predators like cats and rats were introduced in the breeding areas which have killed many of them. Last but not the least, Hunting! These birds were killed for food, pet trade, and also for their gizzard stones. The gizzard stones were sold as jewelry. Many have been taking efforts to preserve this species. Hopefully, success comes their way! 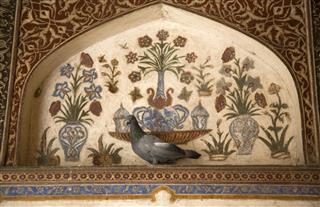 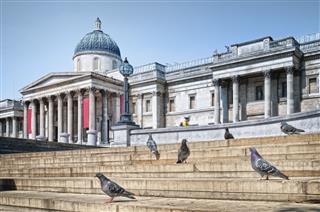