Awesome Information About All the Lovebird Species: Don’t Miss

Lovebirds are popular pet birds, and are famous for their colorful plumage. Here's some info about the various species of lovebirds, along with their pictures.

Lovebirds are popular pet birds, and are famous for their colorful plumage. Here’s some info about the various species of lovebirds, along with their pictures. 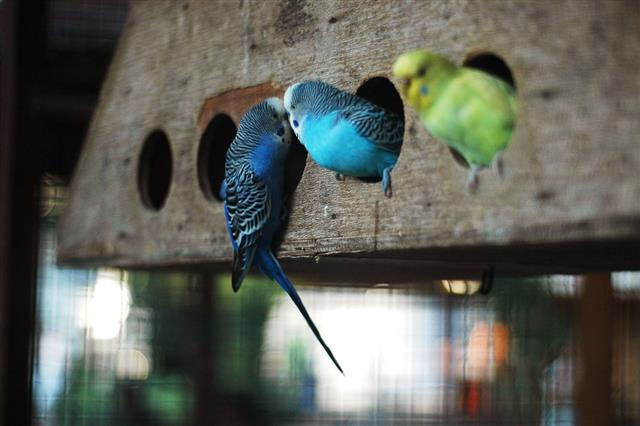 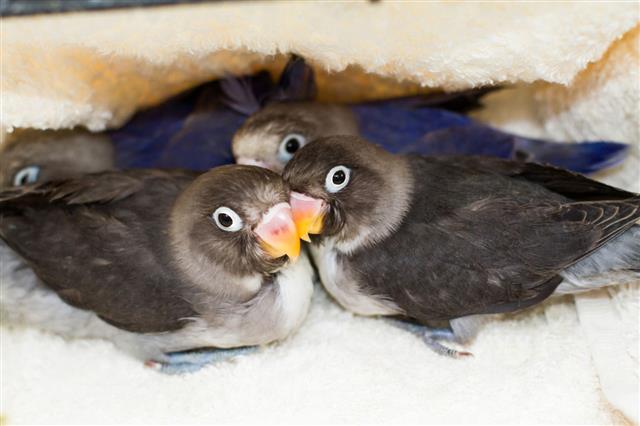 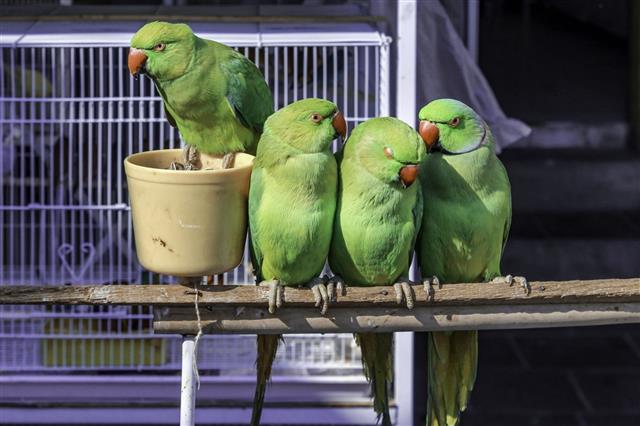 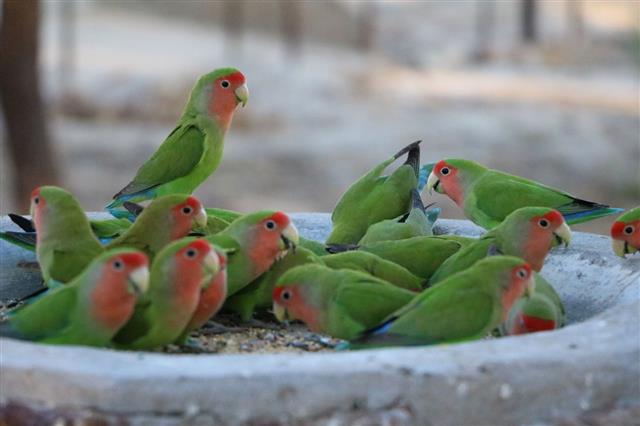 Lovebirds are named so due to the strength of their monogamous bonds. Partners also spend a lot of their time together, which further adds to the allusion from the name.

Lovebirds, members of the genus Agapornis, are part of the parrot family. They are among the smallest parrots.

There are nine species of lovebirds. They are native to Africa; eight of the nine are native to the African mainland, and the other is native to Madagascar. They are all between 13-17 cm long, and weigh about 50 g. Regardless of the particular species, they are stoutly built and are mostly green. The particular variations in the coloration, apart from the standard green, define the species.

Although they are native to Africa, they are popular pets all over the world. The numerous color morphs seen in captive lovebirds is a result of selective breeding. These artificially bred coloring patterns are not beneficial in the wild.

As said before, there are nine species of lovebirds, distinguished by relatively minor differences in their coloring. Here’s some particulars about the nine species, along with their pictures.

The rosy-faced lovebird, also known as the peach-faced lovebird and the rosy-collared lovebird, is found in the deserts of southwestern Africa, particularly the Namib Desert. This species has two recognized subspecies: A. r. catumbella, which is mostly found in Angola, and A. r. roseicollis, which is found mostly in Namibia, Botswana, and parts of South Africa. They are among the largest lovebirds, with an average length of 17-18 cm.

This species is particularly prone to mutations of coloration, and various color patterns are seen in the wild, even discounting the numerous artificially bred morphs. Mostly, they are green, with a pink-red face and a blue rump. There is no sexual dimorphism, and males and females look the same. They love taking baths, and indulge in the activity several times a day. They are very social and very loud and vocal, both of which are traits that can make them difficult to maintain as pets.

Named after Gustav Fischer, a German explorer of Africa, these birds are among the most naturally colorful lovebirds. They have green backs and chests, transitioning into an orange face, via yellow at the neck and olive green at the top of the head. They have a prominently red beak, and a blue rump. They are around 14 cm long. They show no conspicuous dimorphism, though females may perch with a slightly wider stance than males, due to their wider pelvis.

They are mostly found in the regions to the south and southeast of Lake Victoria, in Tanzania. They are popular as pets, but there are few licensed breeding programs for them in the U.S.

Masked lovebirds, also known as the yellow-collared lovebird due to the yellow neck found in the most common color morph, are easily noticeable thanks to their black ‘masks’. The yellow collar is also prominent, but may be differently colored in other color morphs. They have a red beak, and their underside is a lighter shade of green than their back. The yellow collar extends beyond the ‘collar’ and well onto the chest, smoothly morphing into the light green underside. They have conspicuous white rings around their eyes. In the white-blue coloration, the yellow, dark green, and light green is replaced by white, dark blue, and cyan, respectively, while the black mask remains untouched.

Yellow-collared lovebirds are less than 15 cm long. They are found in the same regions as Fischer’s lovebird: Northern and northwestern Tanzania. They show no sexual dimorphism, and determining their sexes can be difficult, since two same-sex partners can engage in similarly affectionate behavior as two different-sex partners.

Uniformly green, apart from a thin black collar, the source of the name is very obvious from the appearance of this species. Both sexes look exactly the same. Also called Swindern’s lovebird (thus, the specific name), they are found in the equatorial rainforests of Africa, in Congo-Kinshasa, Congo-Brazzaville, Cameroon, Central African Republic, Liberia, Uganda, and Ivory Coast. They are about 13.5 cm long.

This species is not popular in the pet trade, since it requires a staple diet of native figs.

As the name suggests, this species is recognizable by the prominent black feathers on the underside of the wings. The red patch on the forehead is only seen in males, in addition to a thin ring of red feathers around the eyes. Both sexes have a red beak, though the male’s beak is noticeably more richly colored. Apart from that, both sexes are completely green, apart from a lightening of the shade along the tail, resulting in yellowish feathers at the tip.

Also known as the Nyasa lovebird, this species is among the smallest of the genus. It is usually less than 13 cm long. It has a coloration similar the Fischer’s lovebird and the rosy-faced lovebird, with an orange head and neck morphing into green at the back and front. However, it has a green rump, unlike the Fischer’s lovebird, which has a blue rump, and it has conspicuous white rings around its eyes, unlike the rosy-faced lovebird.

Lilian’s lovebird is extremely rare, if not completely absent, from the pet trade due to a noted difficulty in breeding them in captivity. It is currently almost endemic to the Liwonde National Park in Malawi.

The black-cheeked lovebird is the lovebird most threatened by habitat loss. It is only found in patches in the region around the borders between Namibia, Zambia, and Botswana. It is about 14 cm long. It has a green back and front, with a dark orange-brown head flanked by black cheeks and neck, which is connected to the green chest via a small orange patch. It has white rings around its eyes.

It can be easily bred in captivity, but is uncommon as a pet, due to the initially heavy numbers of imports. Ironically, the heavy imports contributed to lowering its numbers, and imports of the bird are now rare.

Named due to the prominently red front halves of their faces, these lovebirds are also known as red-headed lovebirds. They are about 15 cm long, and uniformly green apart from the eponymous red patches. They also have red beaks. Regarding both red patches and the beak, the male has a much more distinct and richer coloring. The female’s beak is pale, and the patches are smaller and less conspicuously demarcated than the male’s.

They have arguably the largest range of all lovebirds, extending across central Africa, extending from Sierra Leone to Ethiopia, and as far north as Mali and Chad, to as far south as Kenya and Angola.

Males and females both have a darker back and a light green underside. The male has a light grey head and upper chest, which gives the species its name. The female has the same color pattern on its head as the rest of the body. They are naturally extremely shy, which makes them unsuitable as pets. This, combined with a reluctance to breed in captivity, means that grey-headed lovebirds are extremely rare as pets.

In the wild, lovebirds feed on varying diets, made up of countless grass seeds, fruits and vegetables, and occasional insects. For pet lovebirds, it is best to consult your pet shop, according to the particular species you are buying. They need space to fly (at least 1 cubic meter per bird), and a constant water source for baths.

They have a tendency to be social towards humans, and can thus, become excellent companion pets if raised properly. A bond between the owner and the bird needs to be established early on, through gentle and frequent contact. Without this, lovebirds unaccustomed to human contact will bite, as they have fierce territorial instincts, and their large beaks can pack a surprising punch. Their need to nibble (their beak grows continuously) has to be kept in check by providing them with numerous chew toys made of wood or cuttlebone. They are very vocal, but shrill and annoying calls are usually a sign of distress. Once they become used to their owner, they willingly perch on his/her finger or shoulder, and try to preen them. 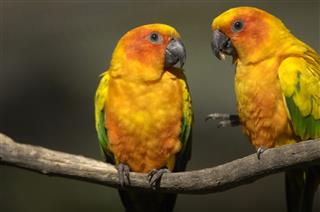 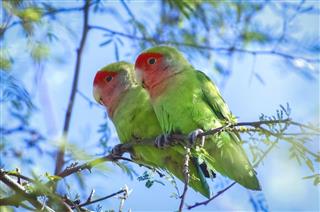 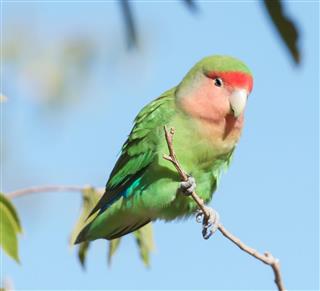