Top 14 Most Colorful Birds in the World: An Epitome of Beauty

Birds are known to make use of their colorful plumage for a wide range of reasons. BirdEden brings you pictures and brief details of some of the most colorful birds seen in nature.

Home / Uncategorized / Top 14 Most Colorful Birds in the World: An Epitome of Beauty

Birds are known to make use of their colorful plumage for a wide range of reasons. BirdEden brings you pictures and brief details of some of the most colorful birds seen in nature. 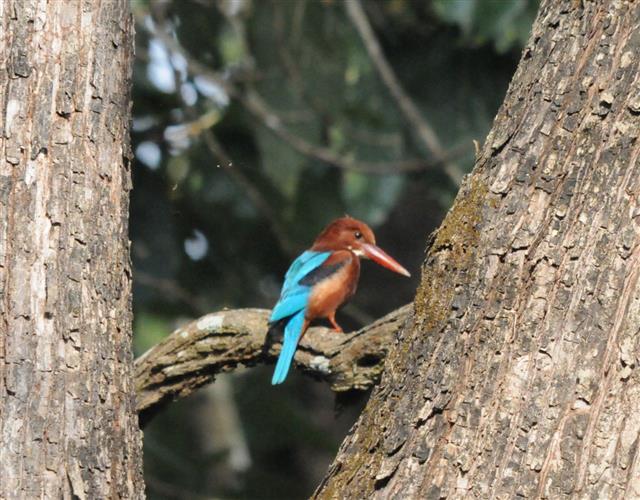 The coloring in the feathers of birds is caused by a pigment called melanin. The pigment is present in the form of tiny particles within the skin and feathers of the bird. Depending upon the concentration, it can produce various colors―from pitch black to copper red and pale yellow.

Besides providing coloration, the melanin pigment also strengthens the feathers of a bird. It is a known fact that pale, colorless, or white feathers are understood to be the weakest and cannot withstand the adverse effects of the elements.

It is observed that several white birds (like the American white pelican, for example) have dark feathers lining the tips of their wings―the melanin present in these feathers provides strength and protects the wings from natural wear and tear.

For now, here’s Buzzle’s list of some of the most colorful birds in the world.

The keel-billed toucan is the national bird of Belize, besides being found in large numbers all over southern Mexico, Venezuela, and Colombia. You may also know it as the rainbow-billed toucan or sulfur-breasted toucan. Their colorful bill gives them their name, as the rest of their body is almost entirely black, barring a neon-yellow neck and chest. Its feet are blue and the tail feathers have a reddish hue at the tip.

This gorgeous creature is a member of the South American parrot family called the macaws. Its habitat is spread over South America―from Venezuela and further south to Peru, along with Brazil, Bolivia, and Paraguay.

Although the bird’s status is near extirpation in Paraguay, the number is fairly large in the rest of South America, which leads to its ‘Least Concern’ listing. The colorful gold-and-blue plumage of this macaw makes it a coveted bird in pet stores, and they also do fairly well in captivity, bonding with their human parents. Their attractive coloring also helps them win mates―among macaws, ‘the brighter, the better’ is the followed mantra.

The Rainbow Lorikeet is a riot of colors―the head is electric blue with a green nuchal collar, the chest is red, and the belly is olive green. The coloring varies among the subspecies, but it remains at the very least, vividly colorful. The bird belongs to a species of Australasian parrots found in Australia, eastern Indonesia, Papua New Guinea, New Caledonia, Solomon Islands, and Vanuatu as well, in abundant numbers.

The male peafowl is called the peacock. It has an iridescent blue-green plumage which is best viewed when the bird fans its tail―known to be a mating ritual. The peacock is the national bird of India. It is mostly found in regions spread over Asia and Africa. In fact, the green peafowl (Pavo muticus), native to the forests of Southeast Asia is declared endangered owing to indiscriminate hunting and reduction of habitat. The green peafowl is an important symbol of Burmese culture.

Also known as the Sun Parakeet, this bird is native to South America, and belongs to the parrot family. Its golden-yellow plumage has a tinge of orange around the belly, with the tail being olive in color. These beautiful creatures are currently classified as ‘endangered’, owing to unbridled trapping caused by pet trade.

The Scarlet Macaw belongs to South American parrot family found mainly in south-eastern Mexico, Amazonian Peru, Bolivia, Venezuela, Brazil, and is the national bird of Honduras. Its coloring is primarily red, but the rump and tail feathers are slightly blue, the upper wing coverts are yellow, & upper sides of the flight feathers are dark blue, making it quite colorful bird it is. Destruction of habitat has led to local extinction in some regions, but the species is not under any threat overall.

The Golden Pheasant is also known as the Chinese Pheasant, and is a game bird widely found in the forests of western China. It is easily recognizable with its characteristic golden crest and rump and bright red body. Its neck is deep orange, and gives a cape-like appearance with an alternating black and orange fan that covers the entire face, barring its bright yellow eye with a pinpoint black pupil.

Quetzals are native to the humid highlands of Mexico and Guatemala, and belong to the trogon family. These birds have an iridescent green coloring on their wings, chest, and head, while their belly is a shade of fiery red. Females are colored slightly different, with hints of brown and gray. The Resplendent Quetzal is the national bird of Guatemala and is also the name of the currency. Also, this species, along with the Eared Quetzal are facing a Near-Threatened status.

Male Mandarin ducks are possibly the most colorful of the entire lot of birds. It has a red bill and a red face, along with a large white crescent above the eye. The chest is purple lined with two vertical white bars. The flanks have two orange “sails” at the back.

The female Mandarin duck is much less striking in comparison. Though their numbers are dwindling in China and Russia as a result of export and destruction of habitat, Mandarin ducks can be found in small numbers all over the world, including Japan, the United States, and Great Britain.

Turacos are unique-looking birds, belonging to the Musophagidae family, endemic to sub-Saharan Africa, where they are found in decent numbers. Their coloring does garner attention, but it is more due to the peculiar shading in the plumage that makes turacos so attractive. They are mostly shooed away because of their shrill and piercing calls, and are classified as ‘go-away-birds’. Their crest is quite prominent, as is their long tail.

The northern cardinal is a North American songbird. The adult male’s coloring is easily recognizable, with a bright shade of crimson. It has a black face mask over the eyes, extending to the upper chest. The color takes on a more dull and darker hue on the back and wings. Northern cardinals are easily spotted not only because of their coloring, but due to their widespread population as well.

These medium-sized birds are identified not only by their vivid coloring, but also their long, pointed beaks. The coloring of the kingfisher’s plumage depends on its species, but is commonly observed to be in bright shades of green and blue. Kingfishers have a widespread habitat, with most species being found in continents outside the Americas.

The hoopoe’s most distinct feature is the crown of feathers that sits atop its head. The neck and chest takes a shade of burnt orange, and the wings covered in crisscrossed black and white stripes. The belly is usually white. The species is native to Africa and Eurasia, where it is classified under the ‘least concern’ category.

The Birds-of-paradise comprise several species known for the brightly-colored plumage of the male members. These birds are native to the forests of New Guinea and its neighboring islands, where they make up respectable count.

Here is Lesser Bird-of-paradise, which is maroon with a yellow crown and a brownish-yellow upper back. The males have a dark emerald-green throat, a pair of long tail-wires comprising ornamental flank plumes which are deep yellow at their base, going ombre on the outward.