Interesting Facts About Bobwhite Quails That’ll Leave You in Awe

The Bobwhite quail is the most popular game bird native to North America. BirdEden highlights some interesting facts about this bird. 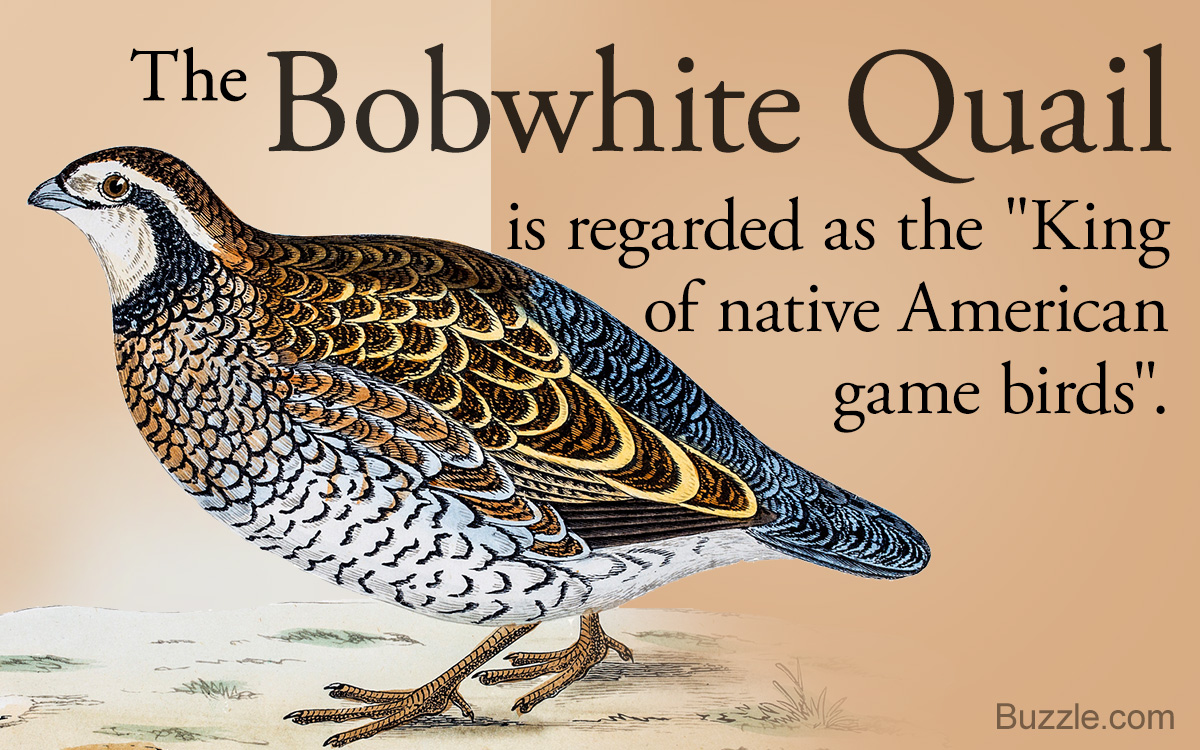 The Bobwhite quail is the most popular game bird native to North America. BirdEden highlights some interesting facts about this bird.

The male bobwhite quail makes a distinct “bob-white” call to attract a female for mating; hence the name.

The bobwhite quail, or northern bobwhite, is a small ground-dwelling bird which has a close resemblance with a chicken. It has a plump, round body and a square-shaped tail. It is a popular game bird that is mostly found in the eastern regions of North America. Bobwhites are usually found in habitats that mainly include grasslands, pastures, fields, and wood edges. Commercial farming of these birds has become a profitable business since they are generally hunted for food and sports. Here are some interesting facts about the bobwhite quail.

▸ Bobwhites have a round body with an average weight of 5-6 ounces. They measure about 8-11 inches in length.
▸ The overall body is mottled reddish-brown and white, except the tail which is gray in color.
▸ The bill is short, curved, and has a brownish-black color.
▸ Males have white-colored stripes on their face as opposed to buff-colored facial stripes in females. Similarly, the base of the bill is black in males and yellow in females.

▸ Once a mate is found, the birds start building their nest together, where the female lays the eggs. At a time, females can lay around 20 eggs.
▸ The incubation period lasts for about 23-24 days, after which the eggs hatch. Not only females, but males too incubate the eggs.
▸ Both the parents look after their young ones for about two weeks, after which they are ready to fly.

▸ Bobwhites can be found in the central and eastern United States. They are commonly observed throughout most of the East, especially the Southeast, and in central parts of Georgia.
▸ They can also be found in southern Ontario, Mexico, Cuba, and some regions in Central America.

▸ Bobwhites usually prefer herbaceous and woody vegetation areas where half the ground is exposed. However, their habitat may change with the seasons.
▸ In spring and summer, they prefer grasslands, drainage ditches, and roadside and pond edges for nesting, feeding, and roosting cover.
▸ During winter, the bobwhites depend on dense bushy areas to prevent snow from reaching the ground and covering the seeds needed for their survival.

▸ Bobwhites build their nest on the ground.
▸ The mating pair works together to dig a hole in ground which is about 2 inches deep and 6 inches wide.
▸ They line the hole with grass and weeds to form a nest.
▸ They often weave dry grass or weeds to form an arch around the nest. This hides the nest from direct view of enemies.
▸ It takes around 5 days to build the nest.

▸ The bobwhites are not good fliers by nature. Although they can fly relatively short distances, their average flight lasts only for 5.1 seconds. However, they are gifted with strong legs that help them quickly walk or run away from danger.
▸ Owing to their body color, they can camouflage themselves to hide from predators. On sensing danger, the bird will stand still in its place or freeze, making it particularly difficult to spot.
▸ They have the ability to store food in their crops (food storage area) for later digestion. Therefore, they can stay without food for quite some time.

▸ They eat grass seeds, some fruits, and insects such as spiders, bugs, flies, bees, etc., during summer.
▸ They mostly feed their young ones with insects until they become 6-8 weeks old.
▸ The females eat more insects than the males during the breeding season since they need more protein for laying eggs.

▸ Populations of bobwhites have been declining in the recent years, mainly due to loss of habitat, harsh winters, and intensive agricultural practices.
▸ Excessive snowfall during winter can block their foraging habitat, thereby reducing their chances of survival.
▸ Pesticides can also harm the bobwhites since they feed on insects too.
▸ Predators such as foxes, skunks, coyotes, raccoon, owls, cats, dogs, and snakes also pose a threat to the existence of these birds.

▸ Bobwhites are commonly referred to as the “King of native American game birds”.

▸ About 1.7 million people in the United States hunt the bobwhite quail.

▸ Bobwhite meat is considered to be a delicious alternative to chicken.

▸ At night, these birds keep a watch for predators by forming a covey circle on the ground, with heads facing out and tails pointing in.

▸ Fire ants are considered as one of the predators of bobwhites since they destroy their nests and prey upon the eggs.

▸ Bobwhites are one of the most extensively studied bird species.

▸ According to reports, the oldest Bobwhite was 6 years, 5 months old.

Although bobwhites can live up to 6 years, most of them die within the first year of their life due to constant threats from predators and habitat degradation.