The brown pelican was adopted as the state bird of Louisiana, and it features on the official state seal. It is found abundantly today, but faced near extinction, had it not been for the efforts of some people. This BirdEden article provides some interesting facts about the Louisiana State Bird.

The brown pelican was adopted as the state bird of Louisiana, and it features on the official state seal. It is found abundantly today, but faced near extinction, had it not been for the efforts of some people. This BirdEden article provides some interesting facts about the Louisiana State Bird.

The brown pelican’s legs are very small in proportion to its body, giving it a clumsy look. 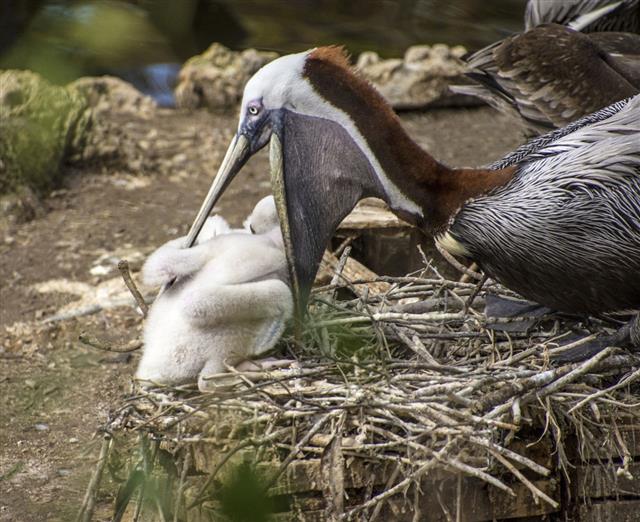 The pelican was a favorite of the people of Louisiana because of the way it raised its young ones. Thus, the people considered it as the state bird, long before it was made official. The then Governor of State, William C.C. Claiborne, used the pelican on the official documents of the state during his term. In 1902, it was included as a part of the state seal, and in 1912, a pelican and her chicks adorned the state flag. In 1958, it was legally adopted as the state bird. On July 26, 1966, an amendment was brought about, making the brown pelican the official state bird of Louisiana. The following paragraphs provide some more information about this fascinating bird.

Pelican on the Louisiana state flag

The brown pelican is a large bird, which is 40 to 54 inches (3 to 4 feet) in length, with a wingspan of 6 to 7 feet (72 to 84 inches). It weighs between 5 to 8 pounds (3 to 5 kg), sometimes more. It has webbed feet, and is an excellent swimmer. It has a red-colored, expandable, membranous throat pouch that it uses for catching fish.

It has short legs, a long neck, and a very long beak. This gives it an overall appearance of being stocky. Its head is whitish-yellow in color with a brown back and wings, and a darker, brownish-black belly. The males and females look alike. The body of this bird has air pouches all throughout, which gives it buoyancy and does not let it drown while hunting. It leans in various directions and preens its feathers using its long beak. 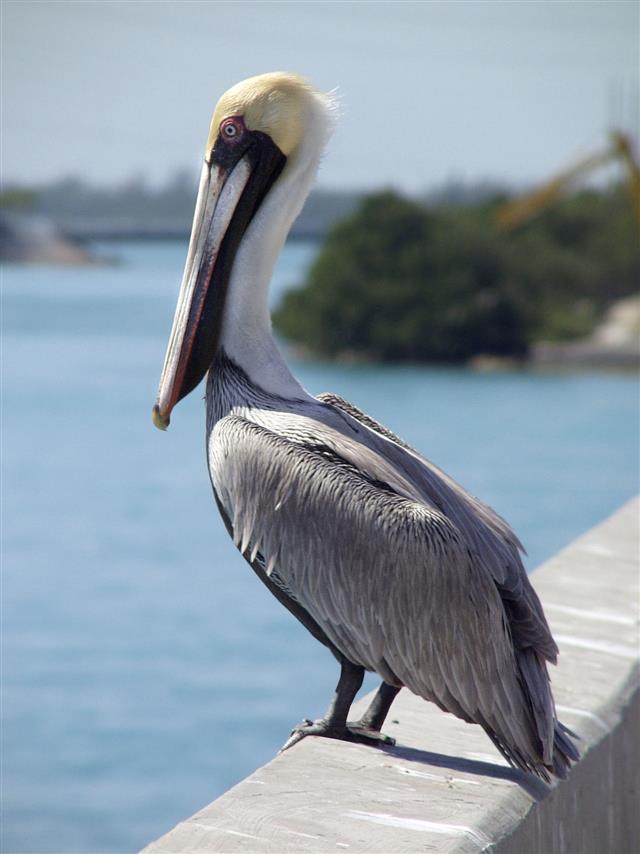 The brown pelican is a completely marine species. It lives in coastal areas and does not venture very far inland. It is found in areas like lagoons, marinas, estuaries, bays―basically shallow waters.

Its distribution is quite widespread. In the US, it is found in California, Louisiana, Alabama, Mexico, Maryland, and North Carolina. It is also found in Chile, Venezuela, the Galapagos Islands, Trinidad, and as far as British Columbia and Nova Scotia.

This bird eats small and medium-sized fish like herring, menhaden, sheepshead, mullet, silversides, and also anchovies and sardines. It is also known to eat crustaceans from time to time. It also frequently visits ports for fish scraps that fishermen throw.

The brown pelican is the only pelican species that hunts by diving into the water from a height. When it is diving, it tilts its head to the left to protect its esophagus and trachea from the impact. When it spots a fish, it swoops down and scoops it up into its beak. Water also gets scooped along with the fish, which the pelican later drains out of its pouch. The pelican’s pouch can hold up to 3 gallons of water, which is three times the capacity of its belly! Once the water is drained, the bird tilts its head back and swallows the fish whole. At times, seagulls steal the fish from the pelican’s mouth. They sit on their heads on many instances, waiting to get a hold of the fish!

This bird moves to the islands for the breeding season. It builds its nest in trees, or on the ground in the absence of predators. The male chooses a nesting site, and defends it if anyone tries to encroach upon it. Then he tries to attract a mate. When a female selects a male, the nest-making process begins. Nests are made using twigs, reeds, bones, grass, etc. The male fetches the material, and the female makes the nest, which takes up to a week to be completed.

The female lays a clutch of 2 – 3 eggs that are chalky-white in color. The eggs are incubated for 28 to 30 days; the brown pelican uses its webbed feet to keep the eggs warm. Thus, if there is any disturbance during the incubation period, which startles the bird, then the eggs can break under its feet. The chicks are born without any feathers; they have pink skin. They are cared for by both the parents, for about 60 to 75 days. During this time, they are fed regurgitated food. When they are older, they learn to fly and catch fish.

Although its predators in the wild are very few, the brown pelican is sometimes preyed on by seagulls, stray cats or dogs, alligators, sharks, raccoons, sea lions, skunks, etc. However, one of its biggest threats is the broken fishing lines in which it can get caught. A large number of pelicans die because of getting entangled in loose fishing lines while swimming or flying.

From the 1950s to the 1970s, the population of the brown pelican depleted drastically due to the harmful side effects of pesticides and DDT, which were used in great numbers then. This led to the pelicans’ eggs becoming soft and brittle, causing them to break during incubation under the birds’ feet. Other pesticides were ingested by the birds via the fish they ate, causing poisoning and death in large numbers.

The brown pelican soon became an endangered species. As a result of this, the use of all pesticides was banned and conservation efforts were kickstarted to bring this bird back from the brink of extinction. All these efforts have paid off, as there are now more than 6,00,000 brown pelicans in the wild, with more than 40,000 pairs found in Louisiana. It is now listed under the ‘Least Concern’ category of the IUCN.

✦ Brown pelicans always fly in a V-form or a straight line.
✦ It is the only bird who has all 4 toes webbed.
✦ It is present on the Louisiana state quarter.
✦ It is protected by the Migratory Bird Treaty Act of 1918.
✦ A brown pelican named Nigel featured in the animated movie, Finding Nemo.
✦ The basketball team of New Orleans, Louisiana is named the New Orleans Pelicans.
✦ This bird is a part of the seals of the Louisiana State University, Tulane University, and University of Louisiana at Lafayette.

A pelican on the Louisiana state quarter 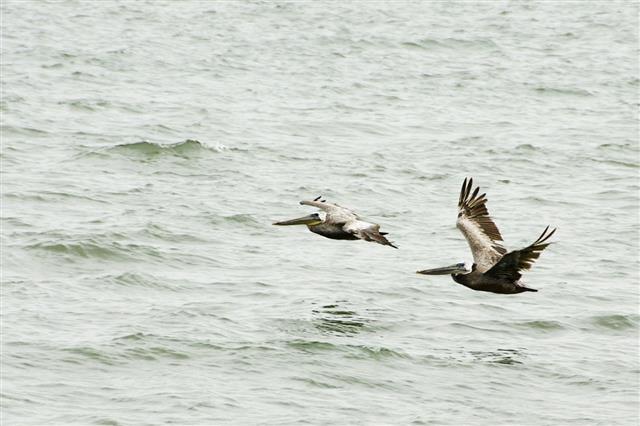 The brown pelican is a fascinating bird to study. Its unique characteristics make it an interesting creature. It is indeed a blessing to the planet that it was saved from extinction, otherwise we would have missed out on something truly marvelous.