A Brief Introduction to the Common Types of Owls

It has been surveyed that there are about 200 types of owls on Earth. And out of these, most of them belong to the typical owl family and the rest, the family of barn owl. Know about some common types of these "wise creatures" of the wild from this write-up.

Home / Uncategorized / A Brief Introduction to the Common Types of Owls 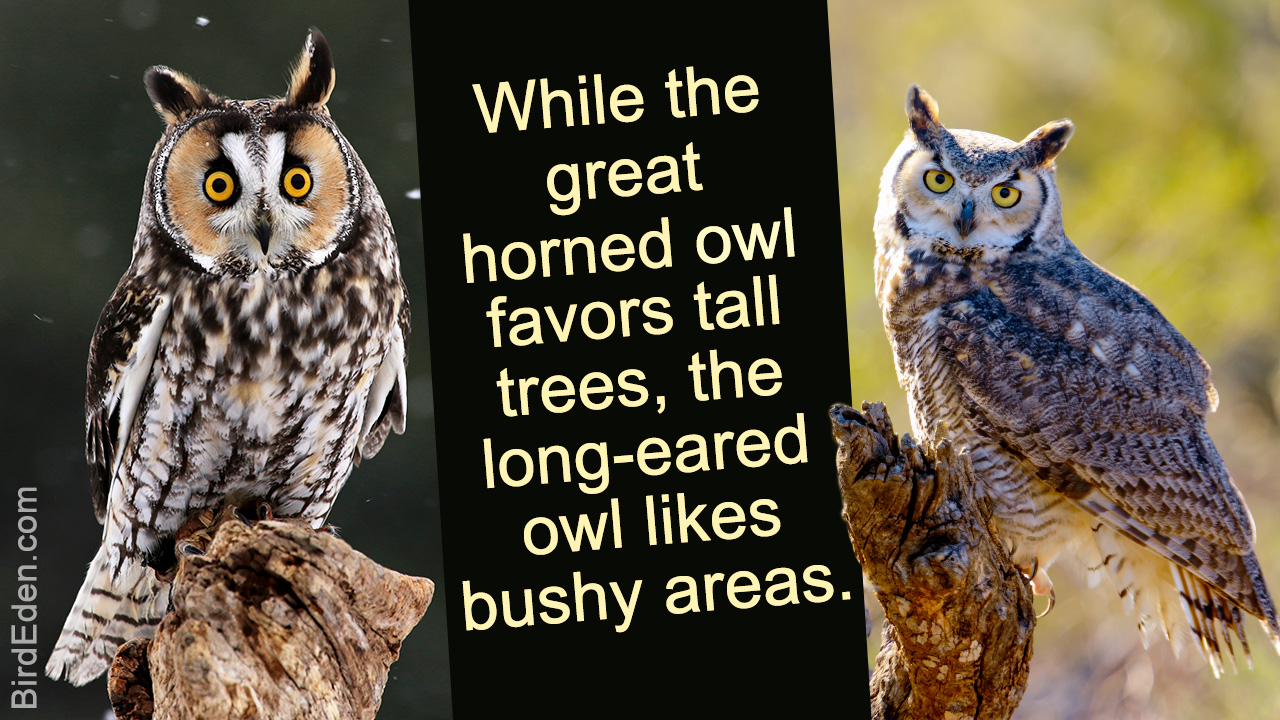 It has been surveyed that there are about 200 types of owls on Earth. And out of these, most of them belong to the typical owl family and the rest, the family of barn owl. Know about some common types of these "wise creatures" of the wild from this write-up. 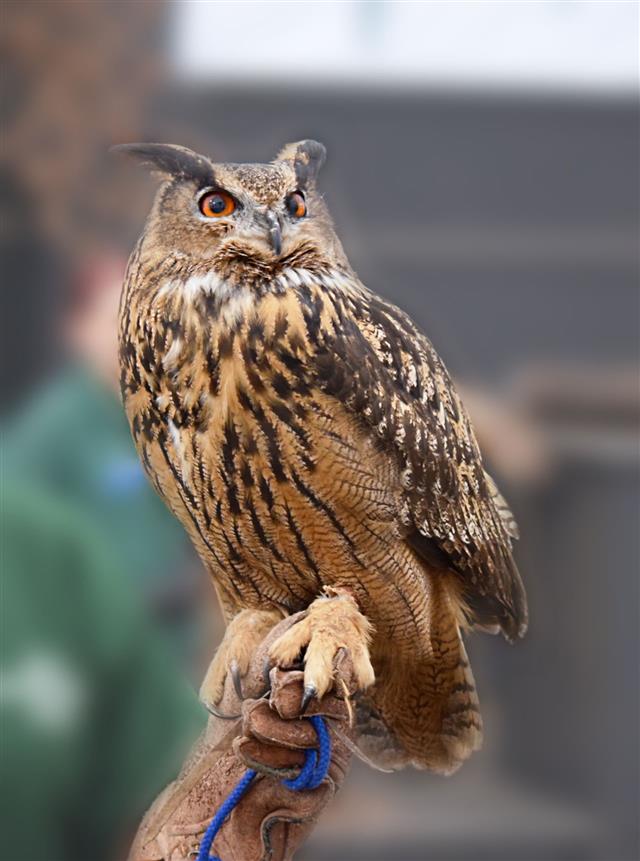 As mentioned, 200 species of living owls exist on Earth, and these have been divided into two families; the Strigidae, which is the typical owl family, and the family of the barn owl (Tytonidae). Most species of these birds live single, and show nocturnal behavior, with a few exceptions.

For most of them, small mammals, various insects, and other birds make up for the main menu, with some of them having developed the art of hunting fish. All regions on the Earth, except the Antarctic, are inhabited by these birds. 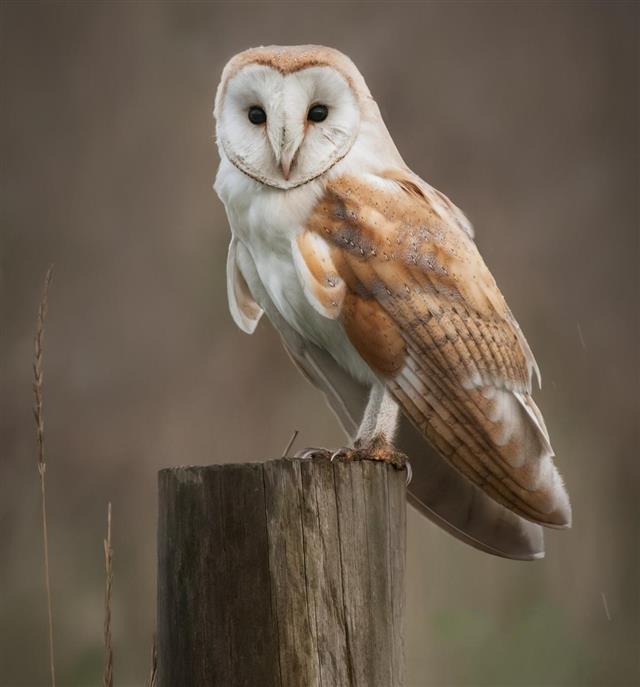 We begin this list with the common barn owl. Also known as Tyto Alba, this species, as the name itself suggests, belongs to the family Tytonidae. It is, by far, the most widely found owl species, and it also holds the reputation of being one of the most widespread bird species in the world. The main characteristic features that distinguishes this owl among other types of owls is its distinct heart-shaped facial disc, along with its long legs, long talons, and small, dark eyes. Also, it has a long wing span, and a short tail that appears somewhat like a square. The bird has a ridge of feathers developed above its bill, resembling a nose. There are 20 – 30 subspecies of this owl. Rodents are the primary source of food for this bird. 9.8 – 18 inches is the bird’s average length, and it has a wingspan of 30 – 43 inches.

Next in the list is the snowy owl. Scientifically known as Bubo Scandiacus, it is reputed to be among the largest in the Strigidae family. Also known as the Great White Owl, true to its name, the male bird has a beautiful white plumage, which camouflages it in its Arctic habitat. Females tend to be darker than males. Also, it is known to be the heaviest and one with the second largest wing span in North America. Lemmings are its favorite food, while rabbits, rodents, birds, and fish are also included in the menu at times. 20 – 28 inches is the average body length, and 50. 4 – 57.6 inches, the wingspan.

As you must have guessed from its name, the elf owl (Micrathene Whitneyi), measures 5 – 5.7 inches in body length, and has a wingspan of 10 cm. It is the world’s lightest owl, and it also belongs to the Strigidae family. The bird has a very round head, with no ear tufts. An interesting fact about this tiny owl is that it nests in cavities in cacti and deciduous trees, which are usually formed by woodpecker. Regions of southwestern United States and Mexico are inhabited by this owl species, and its main food source include insects, favorite being moths, and scorpions. 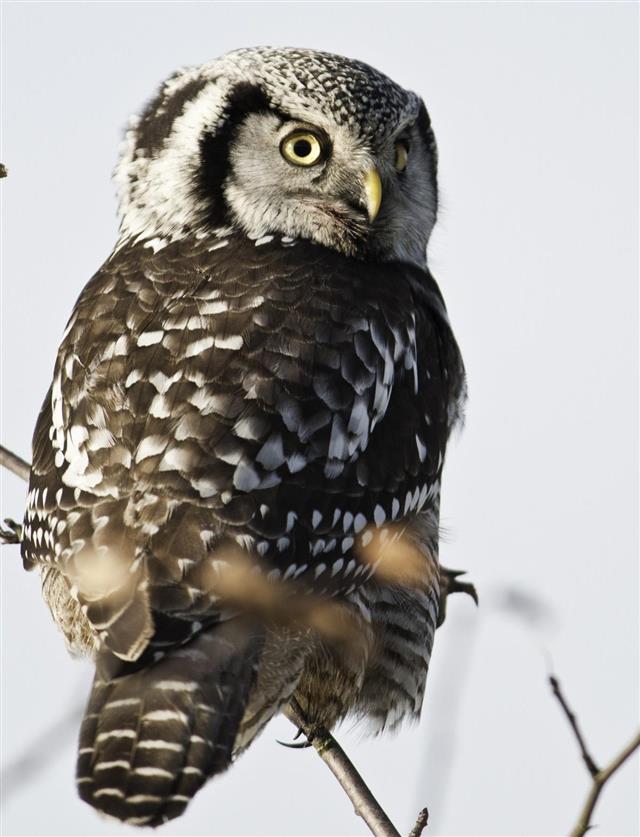 Surnia Ulula is the scientific name attributed to this owl of the Strigidae family. At the back of the owl’s head, there are two distinct markings that look like a pair of eyes. And if you view the bird from far, it might be difficult to distinguish its front from its rear side. As I have cited above, a few species of owls do not show nocturnal behavior, and the Northern Hawk Owl is one of these species. 14 – 17 inches is the average body length, and 27 – 32 inches, wingspan. The North American and Eurasian regions are the habitats of this non-migratory, medium-sized bird. Voles, frogs, fish, and sometimes songbirds are its delicacies. 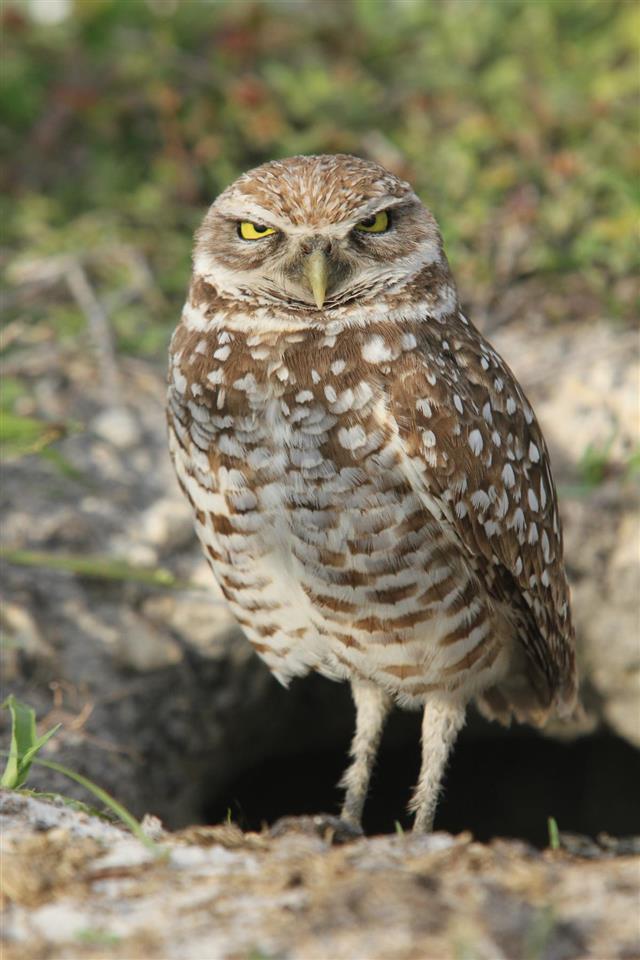 The Burrowing Owl (Athene Cunicularia) is another member of the typical owl family. With a round, light brown facial disc, it is a tiny bird but with a conspicuous pair of long legs. North and South America are the regions widely populated with this species. Similar to the Northern Hawk, even this one is often active during the day, and preys on invertebrates and small vertebrates. What is distinct about this type of owl is a white stripe outlining its chin. 10 inches is the average length of the owl, and it has a wingspan of 21 inches. 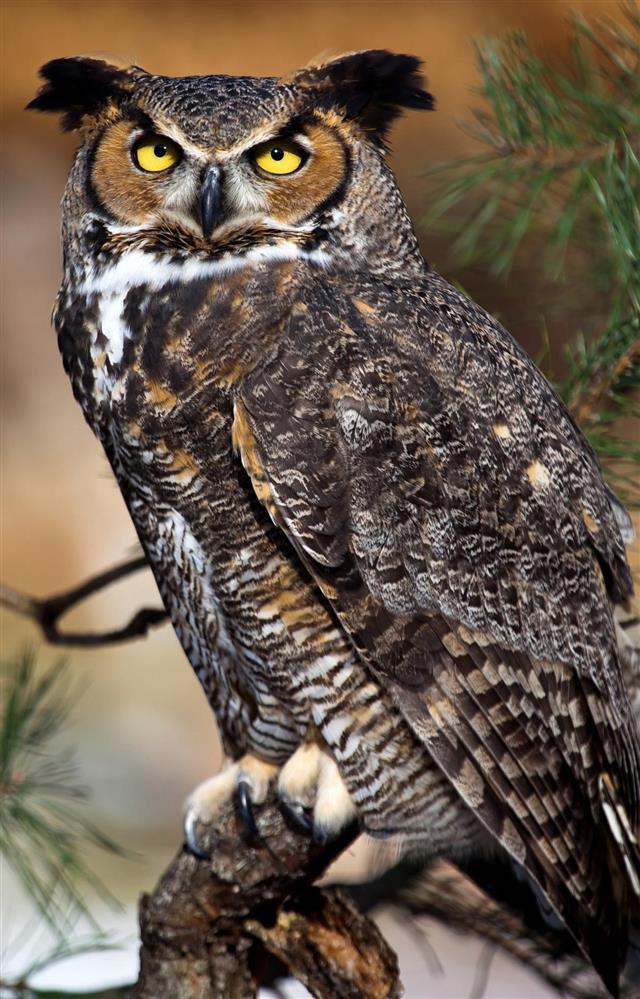 This owl gets its name from the tuft of feathers which give the impression of horns. Scientifically known as Bubo Virginianus, this bird is 18 – 25 inches long, and has a wingspan of 40 – 60.5 in. The face could be brown or grey, and it has a white patch on the throat. The bird is known to have a curved upper beak, which can be 1.5 inches long. The dense forests of North America and Central and South America home this owl species. The bird has eyes which are as large as humans, and cannot be turned inside the eye sockets. Hares, rats, squirrels, mice, moles, voles, shrews, bats, armadillos, muskrats, weasels, rabbits, skunks, house cats, insects and gerbils make up for its diet. 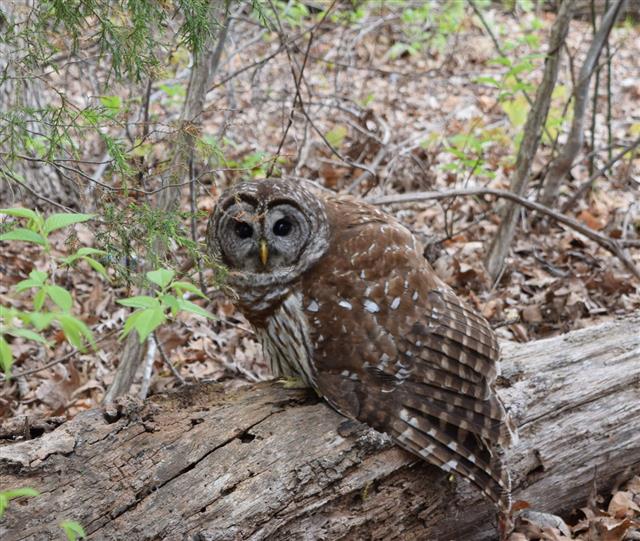 Belonging to the typical owl family, the Spotted Owl (Strix Occidentalis) can reach up to 17 inches in body length, and can have a wingspan of 45 inches. It inhabits the western North American region. The owl gets its name from the heavy white spotting on its breast and belly, which is complimented by soft and fluffy brown plumage. An important fact about the bird is, it mates for life, and does not breed every year. The diet of the bird greatly varies with the location, but generally, flying squirrels, various woodrats species, deer mice, and a few other mammalian species are preyed upon by it. 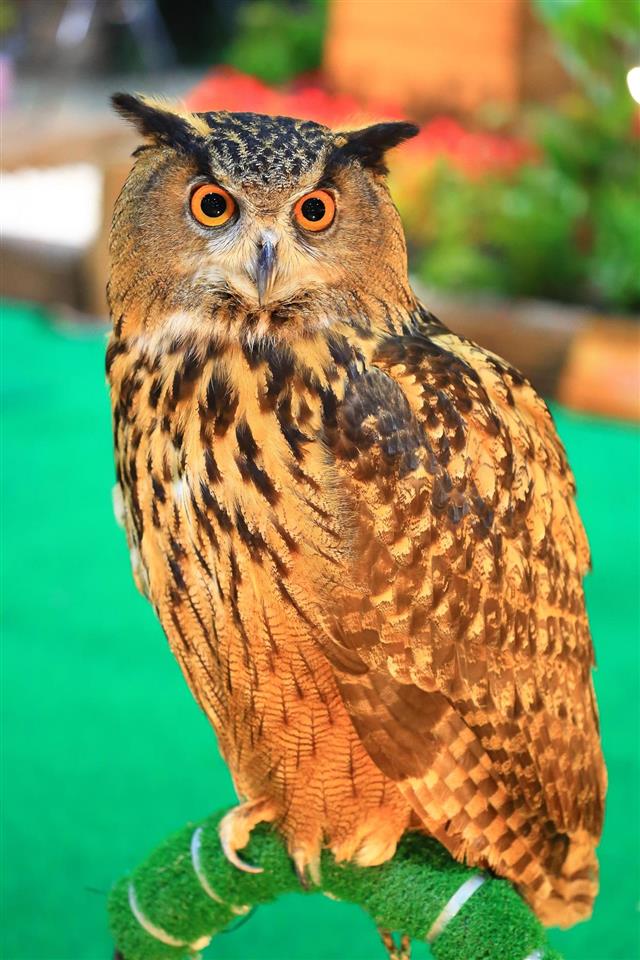 A commonly know species of this type of owl is the Bubo Bubo; the scientific name for the Eurasian Eagle Owl. True to its name, this bird is found in Europe and Asia. It is one of the larger members of the Strigidae owl family. It has a body length of 23 – 30 inches, and wingspan of 55 – 79 inches. A blend of brilliant orange eyes, ear tufts and big built, makes this owl a real treat to the eyes. What is interesting to know about the bird is its feathers which are placed in such a way that the bird can have almost a noiseless fight. Places which this bird resides includes cracks between rocky areas, caves, and cliff edges; a characteristic feature similar to that of an eagle. Main preys include beetles, deer fawns, rabbits, birds, mice, and sometimes even animals of the size of foxes, and marmots.

Even the name gives the impression of the large size of this owl. Strix Nebulosa, is the bird’s scientific name, and its main distinct features include its large, puffy head, bright yellow eyes, and a circular facial disc (it has the largest facial disc of any carnivorous bird). All these features, along with an extremely long tail earn this bird to be one of the largest birds not only in the owl species, but in the world. The owl has a fluffy and thickly feathered plumage, which is usually grey, and sometimes brown. The Great Grey Owl’s length can range from 24 – 33 inches, and the wingspan can go beyond 60 inches. The distribution of this nocturnal hunter is mainly in the Northern Hemisphere, and it mainly depends on voles as its food source. However, in some cases, small rodents, mice, chipmunks, small hawks, ducks, and weasels are also hunted. 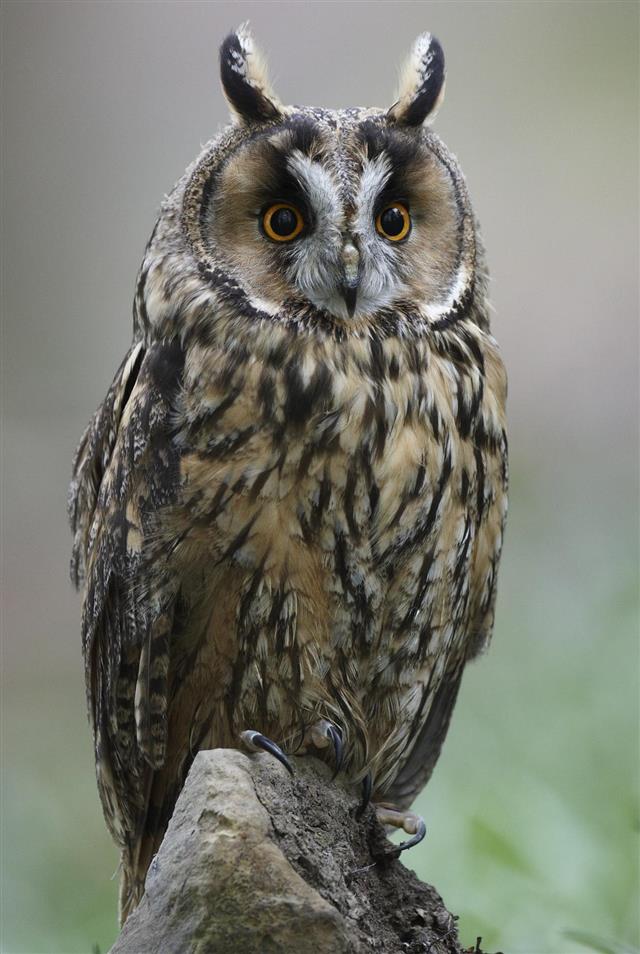 Although called so, this owl does not have ears, but long, erect blackish tufts of feathers which resemble so. The purpose of having such long ear-tufts is to make the bird appear larger while confronting other owls. It has rusty-orange eyes, and it is one of the medium-sized owls of the Strigidae family. Its binomial name is Asio Otus, and it inhabits regions of Europe, Asia, and North America. The average statistics of this bird is 12 – 15 inches in length, with a wingspan of 34 – 39 inches. Active mostly at dusk, it hunts kangaroo rats, mice, voles, and gophers to name a few. When the bird is in its perching position, it is hardly recognizable from its surroundings; it spreads its wings and body so that it looks like a tree branch. 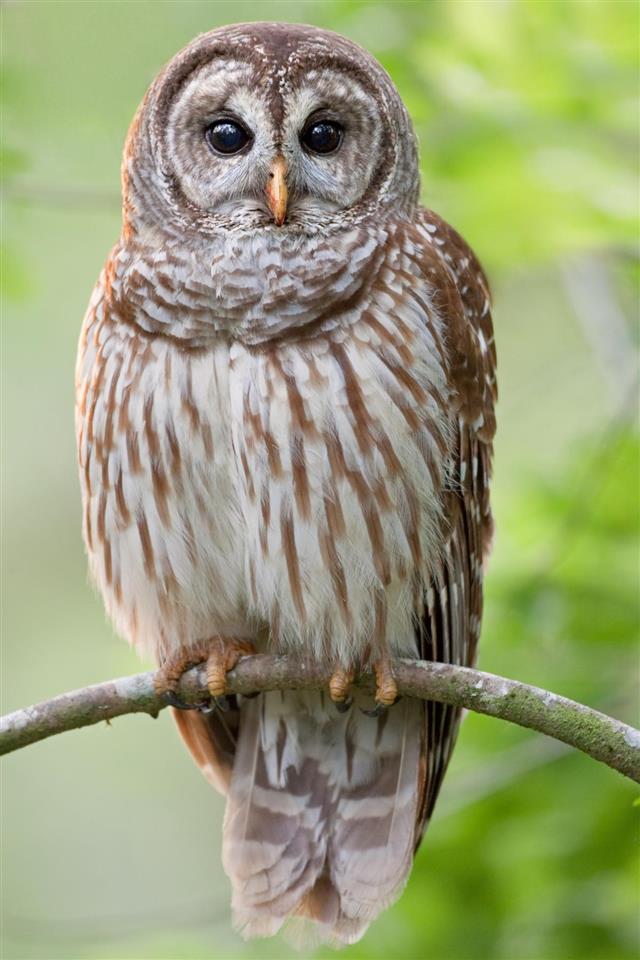 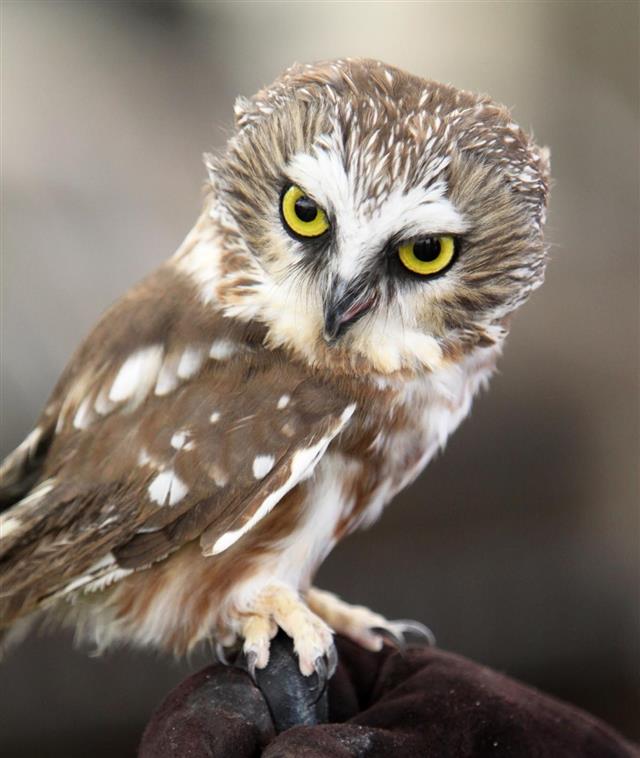 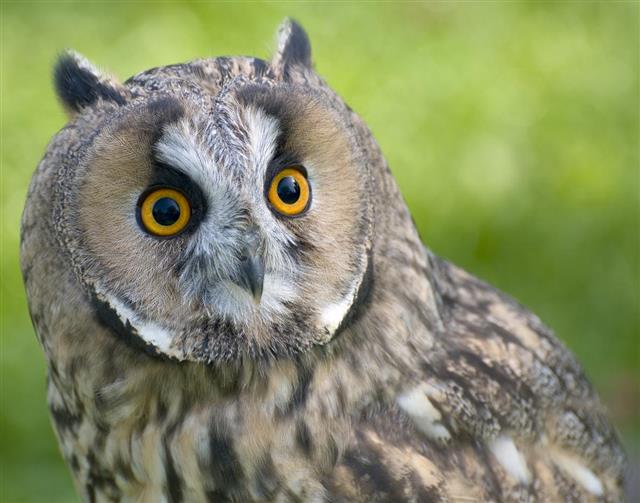 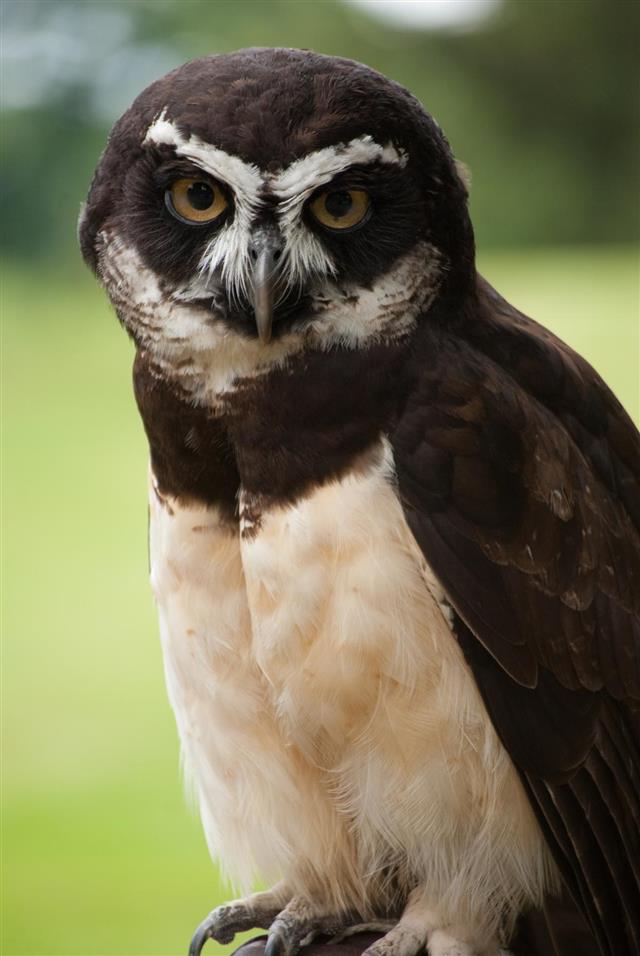 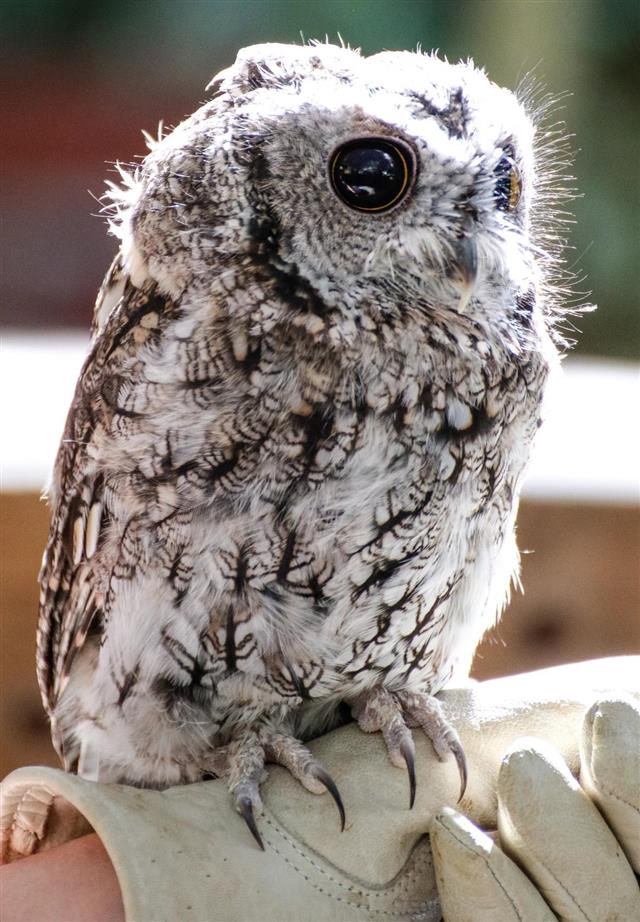 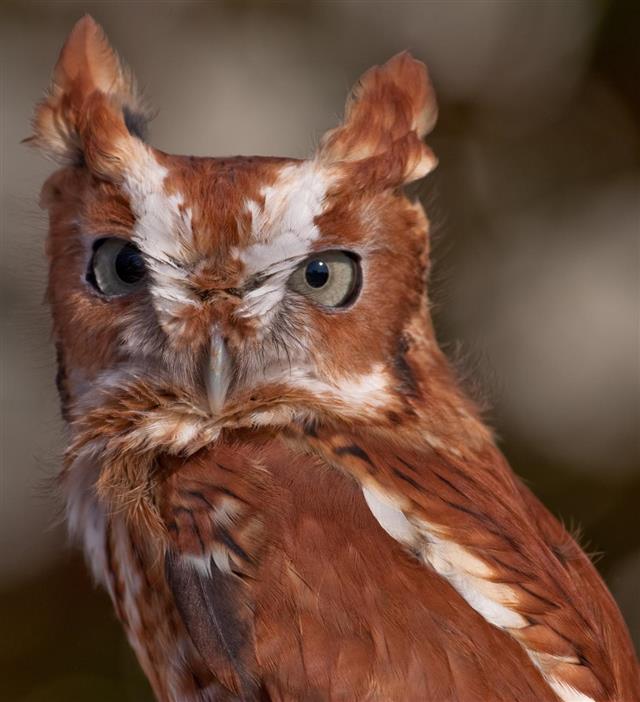 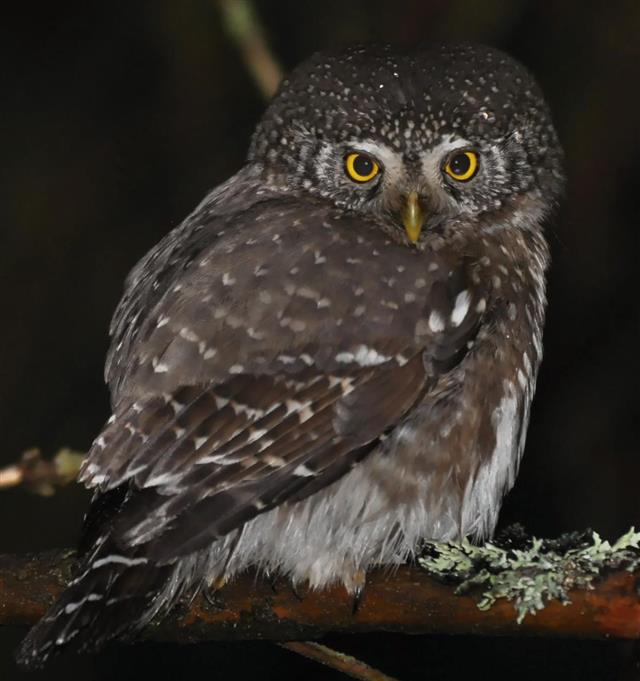 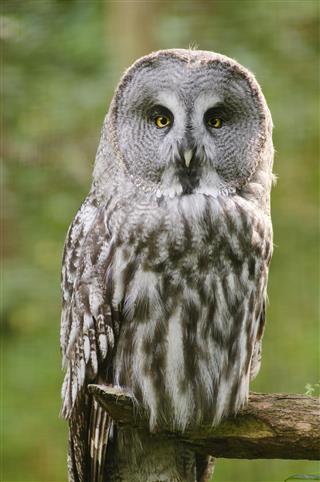 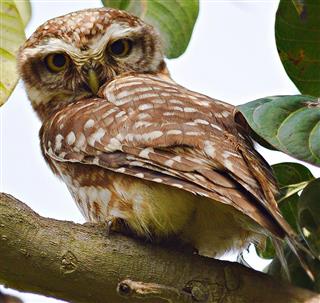 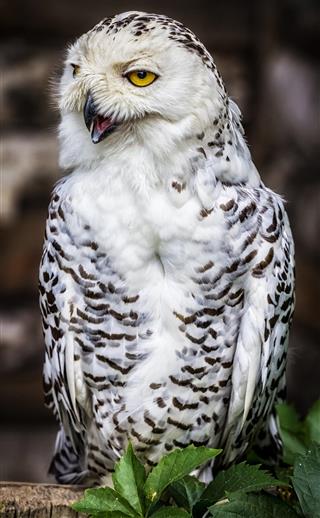 The data presented in this article on the types of owls is just a brief glimpse, and there is much more to know about these beautiful fliers of nature. So, if you should wish to learn some more, a bird enthusiast would be a good source, or even better, books!