Different Types of Woodpeckers With Pictures You’ll Want to Save

Woodpeckers are known for their peculiar beaks and the drumming sound they make. They truly are a unique creation of mother nature. We all come across some of the common species at our feeders but did you know that there are more than 180 of them? 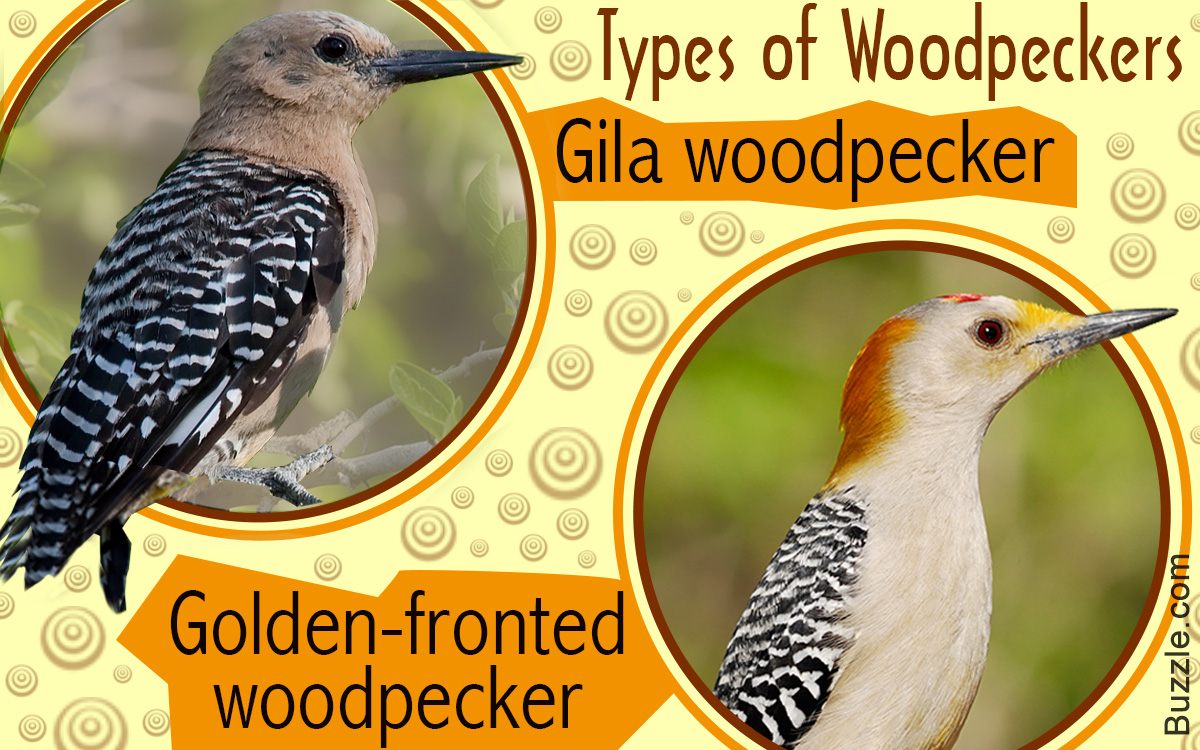 Woodpeckers are known for their peculiar beaks and the drumming sound they make. They truly are a unique creation of mother nature. We all come across some of the common species at our feeders but did you know that there are more than 180 of them?

Astonishing Facts about the Drummers!

➨ Woodpeckers are known for their drumming. They drum almost 8,000 – 12,000 times a day. This means that a woodpecker drums almost 20 times in a second.
➨ They have a small brain and a thick skull which protects them from the constant drumming. Also, they have adaptations to prevent the wood pieces from going into their eyes or nostrils.

Woodpeckers are a part of the Picidae family, which is a group of near-passerine birds. They are found all around the globe, except in New Guinea, Madagascar, New Zealand, Australia, and the polar regions. The habitats vary, from forests to deserts and rocky areas. All the species are characterized by strong bills which are used for drilling and drumming on trees. They also have a long tongue, up to 4 inches in length. The long tongues help them in extracting insects from the wood. Their diet varies as per the species, from insects and grubs, fruits and nuts, to sap from trees. The nesting is typically done in tree cavities or holes in cactus. All woodpeckers except the piculets and wrynecks have stiffened tails which help them balance while climbing or feeding.

There are over 180 species distributed in different genera. The family also includes the sapsuckers, piculets, and wrynecks. Piculets are one of the smallest woodpeckers, but lack a strong bill and the stiff tail. The same goes with the two species of wrynecks. The wrynecks have only 2 species and are included in the subfamily named Jyngiane and the genus Jynx. The piculets belong to the subfamily Picumninae and are divided in different genera, viz, Picumnus, Verreauxia, Sasia, and Nesoctites. The woodpeckers belong to the subfamily Picinae. They are further divided into different tribes. Have a look at the different species of woodpeckers given below.

The genus name Melanerpes has its origin in Latin and means “black creeper”. The members of this genus are all found in the New World.

The name “Sphyrapicus” is a combination of Greek words sphura meaning ‘hammer’ and pikos meaning ‘woodpecker’. All birds have slender bodies, stiff tails, and long wings. The birds feed on the sap of trees and the insects are fed to the young ones. They have a typical flight of alternating quick wing beats and short dips. These 4 birds are found in North America.

Cuban Green Woodpecker, Xiphidiopicus percussus
The Cuban green woodpecker is the only species of this genus and only found in Cuba. It has the size and shape of a sapsucker. It has a bright olive-green body with yellow underparts. The males have a red crown and the females have a black crown with white stripes. This species prefers dry or lowland moist forests.

All the members of this genus are found in North America. The members have a similarity which is the plumage of black and white, and brown and white in some species. Also, most of the males have a red or yellow badge. All of them have a chisel-shaped, straight bill which helps them feed on insects, their main diet. Actually, this genus is in need of revision because there is some confusion in the three-toed species like the Eurasian and American three-toed woodpecker. The recent studies say that 6 species of this genus are shifted to a new genus Leuconotopicus.

These species are found in Africa and areas nearby.

Ground woodpecker
Ground woodpecker (Geocolaptes olivaceus) is the only species of this genus and is one of the three ground-dwelling woodpeckers. It is found in Africa, Lesotho, and Swaziland. It prefers barren and steep areas. Its nests are drilled as tunnels in the vertical bank of water sources. It usually prefers feeding on ants, their larvae, and eggs too.

Rufous woodpecker
The Rufous woodpecker (Micropternus brachyurus) is a brown woodpecker which is found in parts of India, Nepal, Thailand, Myanmar, and other parts of Asia. It is the only species in the genus. It was formerly placed in Celeus because of the similarities but the DNA tests proved that it was totally different. It is a medium-sized bird with a brown body. It has a slightly curved bill and the males have small red patches near the eyes.

The species of this genus are spread all over Europe, North Africa, and Asia. These are large woodpeckers and have green upperparts. These roam around in forests and open woodlands to feed on insects like ants and termites.

The name Dryocopus comes from the Greek words drus meaning oak tree and kopos meaning cutter. The three species of this genus are large and powerful. These are non-migratory birds and are permanent residents in North and South America, Asia, and Europe. These are mainly black and some reds as a crest. Some also have whites, in different proportions. These feed basically on insects like the beetle larvae from the trees.

There are 5 species in this genus. All of them are distributed in North and South America. All the species were formerly in Dryocopus but were separated later. Also, the species dusky-winged woodpecker and lineated woodpecker were considered as the same because they had the same name Dryocopus lineatus.

This is a genus with many species, with different features. All of these species are spread in Central and South America. They prefer to inhabit the tropic and subtropical forests.

Okinawa woodpecker
The Okinawa woodpecker (Dendrocopos noguchii) is the only bird of this genus. This bird is endemic to the Okinawa island in Japan. It is medium-sized and has a dark brown color and red-tipped feathers. It is currently protected in Japan because there are less than 600 woodpeckers left. It is listed as ‘Critically Endangered’ in the IUCN list.