What Do Hawks Eat? Well, You’ll Be Surprised

The eating habits of a hawk are influenced by several factors, including the species in question, native habitat, availability of prey, and so on. Right from insects to medium-sized mammals, these predatory birds will eat anything that they get their 'claws' on.

Home / Uncategorized / What Do Hawks Eat? Well, You’ll Be Surprised

The eating habits of a hawk are influenced by several factors, including the species in question, native habitat, availability of prey, and so on. Right from insects to medium-sized mammals, these predatory birds will eat anything that they get their ‘claws’ on.

Hawks are predatory birds that come under the heterogeneous family of diurnal birds, called Accipitridae. The other birds of prey under this group are the eagles, the kites, the Old World vultures and the secretary birds. Hawks come in the same order as the falcons, the New World vultures and the osprey. These birds of prey are also known as raptors.

The red-tailed hawk is the most widespread species of hawks, living throughout North America. Red hawks are active fliers. They flap a lot and do not soar. They can dive at a speed of 120 mph and catch a prey with their sharp talons. They will eat small mammals like moles, squirrels, mice and shrews. They can also eat raccoon sized animals and pets. They also eat rabbits, grasshoppers, small birds, ducks, bats and fish. They also won’t shy of eating snakes, lizards, frogs and toads too.

They prey on animals, both dead and alive. They swallow the bones, feathers or fur of their prey. They regurgitate the matter that cannot be digested by their bodies, through their mouth.

Hawks living in cities, wild and even the deserts prefer eating small animals and birds. They commonly hunt down, mourning doves, cardinals, pigeons, titmice, sparrows, etc. They will even feed on squirrels, rats as well as other rodents. Hawks will also feed on fish, bats, snakes, lizards, rabbits, if they chance upon these small prey. At times, a hungry hawk will carry off small baby animals like lambs to feed.

What do Baby Hawks Eat?

Hawk Feeding its Young One

Just as the parents are meat eaters, baby hawks also eat meat. They like eating lizards, crustaceans, insects, carps and catfish. If you have found an abandoned or lost baby hawk do not feed it milk and bread. You should feed it small pieces of meat with the help of rounded chopsticks. You should give the baby hawk a couple of drops of water using an eye dropper, after every feeding. You should be very careful of the talons and beaks of the hawks, as they are extremely sharp.

Hawk with its Prey

Hawks have a keen eyesight.They have a 20/2 vision that is eight times more acute than humans with perfect vision. They have hooked beaks and taloned feet. Hawk feet are meant for capturing prey and beaks for biting and tearing flesh. They can fly over speeds of 150 miles per hour when diving. There are some species that can fly thousands of miles, to complete their migration journeys.

The female hawks are larger than the males. They breed in late spring or early summer. Hawks mate for life and can quickly find a new partner, if one dies. The larger hawk species lay one or two eggs and smaller hawks lay three to four eggs annually. The small hawks hatchlings grow to a full size in a month and larger hatchlings take only 11 weeks to become fully grown.

The different species of hawks include Accipiter and Buteos. Accipiters are also known as woodland hawks, that have short, rounded wings and long tails. They use their wings and tails to dart towards the trees to catch their prey, the other birds. The Buteos or soaring hawks have broad wings and broad short tails. This helps them soar high when flying.

Hawks are found in every type of habitat that has open areas with some patches of trees or elevated perches, in North America. Those living in far north, migrate to the south before winter sets in. They can fly all the way to Mexico and South America.

While hawks prey on a wide range of animals, they do have very few natural predators in the wild. Their eggs and young ones often fall prey to snakes and other reptiles. Similarly, human-induced problems like habitat destruction and pollution are also a threat for these birds. While there is no questioning the fact that they are powerful predators, it would be interesting to see how they save themselves from human onslaught. 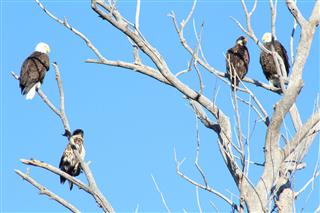 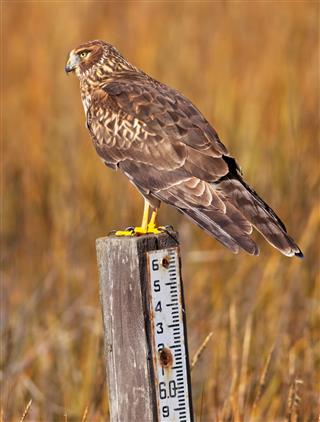 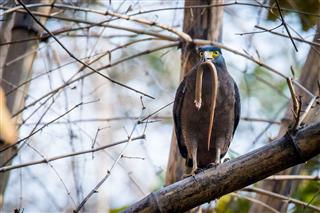 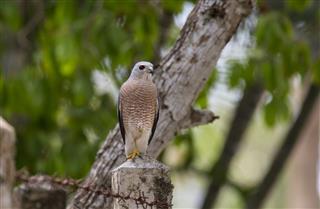